With the holidays upon us, the liquor store shelves are inundated with winter warmers, Christmas ales, and other seasonal specialties. Choosing the right beers for your gatherings this holiday season can be difficult, so I sat down with RJ White, Beer Manager at The Ale Jail in St. Paul to taste the hottest seasonals coming out of Minnesota right now. In addition to helping with sampling, RJ and The Ale Jail also generously curated this selection of Minnesota winter beers.

Perhaps the latest brewery to begin producing beer in cans, Barley John’s have started strong with four flagship beers and this seasonal, a winter ale. For a winter ale this had a very welcome and unique spice presence. Instead of the standard cinnamon and nutmeg notes, we tasted a very novel array of flavors including anise, Amaretto, cherries, almonds, and cardamom. The spice flavor was strong but not overpowering, complementing the caramel malt flavor and balanced bitterness. 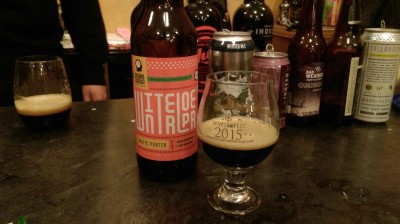 Tallander is the newest beer from Bauhaus, a Scottish Ale that just hit the shelves this last week. It starts with an enticing biscuity aroma with light roasty notes. The flavor was surprisingly roasty, with hints of stone fruit from the yeast, and great notes of toffee.

Another seasonal beer from Bauhaus, their Winterloper Baltic Porter, stays true to Bauhaus’s focus on lager styles. With sweet notes of chocolate and caramel, this is a phenomenal beer with the strong, complex flavors of your typical porter, but an easy-drinking, dangerously smooth and crisp finish.

Despite not being from Minnesota, Rush River is a beloved brewery in the Land of 10,000 Lakes, and we couldn’t resist including this brew in our rundown. Out of all the beers we tried, this definitely had the most pronounced chocolate flavor. Thick, sweet, and smooth, this would make a fantastic dessert beer, great for sipping by the fire this Christmas. I would call this beer the prototypical chocolate oatmeal stout. It tastes exactly how you would expect it to, and that is not a bad thing. Rush River hit the nail on the head with this one.

A brown ale for the winter season is a great description for Ominous. With great notes of nuts and roast, this beer is very approachable and drinkable, but subdued and complex. The use of dark candi sugar evokes flavors similar to a spiced beer, giving off subtle dark stone fruit, raisin, and chocolate flavors, as well as a mild, balanced sweetness. I would call this a spiced beer for people who don’t like spiced beer. Very mature flavors from a young brewery.

Old Friend is a refreshing and novel surprise. The use of ginger gives an incredibly unique flavor, but the beer is very smooth, without any of the “burn” most people associate with ginger. There is also a strong presence of lemon citrus. This ginger/citrus combination pairs surprisingly well with the dark, sweet malt flavor.

After so many dark, heavy beers we were ready for something a bit more drinkable. Harness IPA was just the thing to break up this session of stouts, winter ales, and other beers great for sipping. With a bold aroma of simcoe and citra hops, this beer clears your senses. Great citrus hop flavor greets the tastebuds and evokes summertime IPAs, and a mild spiciness from the rye subtly reminds us that it is still cold outside. This will certainly be my go-to beer for New Years. Drinkable enough to enjoy all night, but complex enough not to bore.

Yes, that year is correct, we’re talking about last year’s Yule from Boom Island. Boom Island cellared this beer for a year themselves because they knew we wouldn’t be patient enough to wait for it. Despite being a year old, there is plenty of this available. And boy was this one worth waiting for. True to Boom Island’s MO, this dark belgian holiday beer gives off light belgian yeast notes of clove. A phenomenal tart flavor complements the black currants used in this beer. The currants themselves give off phenomenally complex fruit notes, and a light spice note subtly complements all of this. This is a great choice for a table beer for any of your holiday parties. And yes – there is also Yule from this year available.

This beer is a spiced version of Olvalde’s Porter, Ode to a Russian Shipwright. The spiced version makes for a great holiday beer, with notes of allspice and nutmeg, and a heavy cinnamon presence to warm you up. Beneath that are notes of wood, caramel and licorice. Similar to its base beer, there is a great spruce presence in this beer as well. This is an incredibly complex and well crafted beer. Perhaps most exciting about Olvalde is their incredible commitment to using ingredients grown on their farm, creating a true farm-to-bottle experience.

Among these ten beers are some of the most unique and exciting offerings available this holiday season in Minnesota. Any on this list will make the bar at your holiday party stand out, or just make you relish the cold winter season. Hopefully this will make your holiday buying just a little bit easier.

All of these beers and many more are available at The Ale Jail, located on St. Clair Avenue in St. Paul. Their commitment to craft beer is admirable – you would be hard pressed to find a can of macro beer in the entire store. In addition to a great selection of Minnesota beers, they have a strong selection of foreign and international beers including beers from traditional Belgian and German breweries. On top of this, their staff are some of the most knowledgeable in the metro area. Check The Ale Jail out on Facebook or Twitter.