Minneapolis artist Erica Williams has returned to with pen and ink to create label art for Surly Brewing’s 9th Anniversary Beer, NEIN. Williams has experience with bottle label art. She crafted the 2014 Surly Darkess artwork, and she worked with Indeed Brewing on their Derailed Series.

Erica’s inspiration for Surly’s Nein Anniversary Ale artwork mirrors that of the ale itself. “Todd visited Germany and knew he wanted the beauty of traditional German aesthetic reflected in the label so I used heraldry as my main source of inspiration. Lions, black eagles, billowing scrolls, and symbolically powerful imagery are commonly found in their shields, architecture, and art so we went with that,” said Williams. “I also used three lions, each with three eyes, because Todd and I are both cat people and I wanted to infuse the label with 3s and 9s. The oak leaves play to the process of making the beer and the spades are a symbol of good luck.”

“I put a lot of time into planning my drawings but I always leave room to allow them to develop organically in the moment.”
– Erica Williams

The label was drawn with pen and ink incorporating lots of small details and flowing lines. Like all her drawings, Erica used Rotring Rapidograph pens. She says they are “amazing” and the different sizes allow her to achieve the desired level of detail.

Who Would have thought, when we sold our first keg in 2006, that we would raise our 9th Anniversary glasses in a  new brewery, restaurant, and beer hall? So much has changed in such a short time, both at Surly and across Minnesota. The state’s beer scene is exploding and we are proud to have been part of the boom. Two things, however, haven’t changes a bit – Todd’s distinctive take on beer styles and our local artists’ amazing talent. Erica Williams’ meticulous design for NEIN is the perfect match for Todd’s approach to his craft.

Inspired by a recent trip to Bamberg, Germany, NEIN is brewed with oak-smoked wheat malt, fermented with German Hefeweizen yeast, and aged on charred oak. It is a huge, complex, dark beer, delivering the flavors of smoked banana, vanilla, and clove. 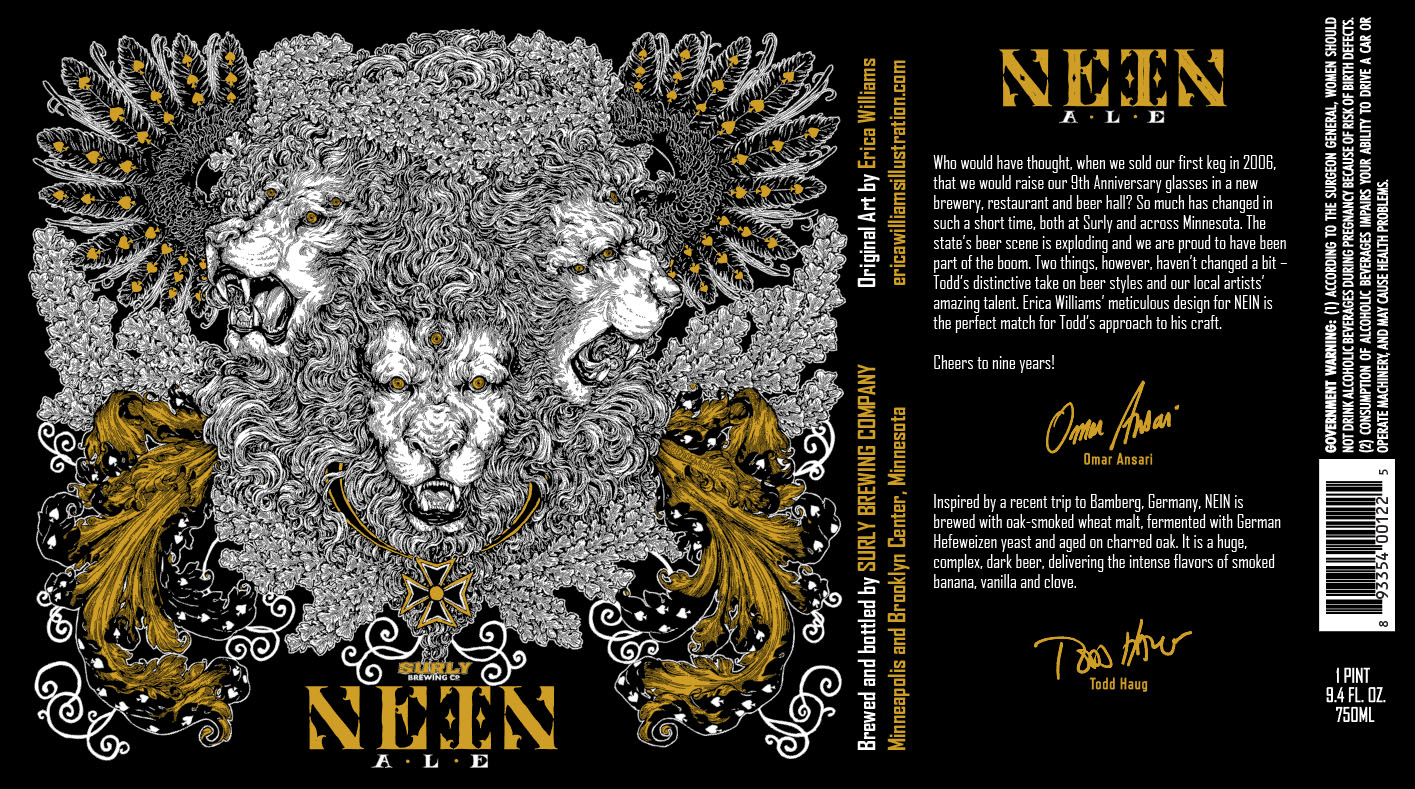