Just days into the new year, the 10×10 mural painted on the building that houses Sisyphus Brewing at the corner of Ontario and Lyndale Avenue in Minneapolis was defaced. The artwork was created by local artists Adam Turman and Josh “Jawsh” Lemke just over a year ago and paid for by 186 backers of a successful Kickstarter campaign.

“We wanted to support the local art community and put something cool on a wall for people to look at,” explains Sam Harriman, head brewer and co-owner. “It makes no sense why they painted where they did – there is plenty of space up there for people to do something.” 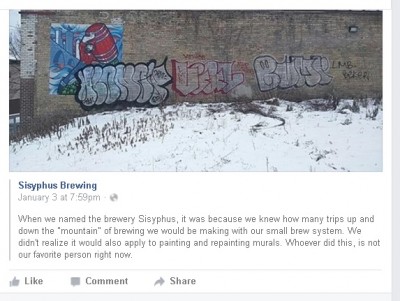 Reaction to the news and the defaced image, posted to the brewery’s page on Facebook is a mixture of outrage and sympathy. Comments range from doing something extreme to just letting it be. Others ask where they can make a contribution to repair the one-of-a-kind mural.

“Adam and Jawsh are going to repair the damage once the weather warms up,” Harriman reports. “They can’t paint when it’s this cold out. They also want to paint the whole wall and hope that discourages a repeat vandalism, but that’s pricey and my landlord isn’t exactly on board with that idea (yet).”

Please call Minneapolis Police if you have information about the individual(s) responsible for the graffiti.

Updated – 1/6/2015 at 12:47 from Sam: “We have the name of the individual responsible, but he’s from Cincinnati and just is going around city to city doing this. It is unlikely he’s still in Minneapolis.”

Officer John Elder of the Minneapolis Police Department said they are investigating.