A blistering wind attacked my exposed face from the north just as soon as I got out of my well-heated minivan. I carefully but quickly shuffled over patches of ice in the street, aiming for promised shelter just ahead, declared by an illuminated sign. Fumbling with my smartphone, I looked again as it reported a temperature of -9, windchill of -19 below zero.

Brad Ashton and I had unintentionally picked one of the coldest days of the year to drive an hour to check out another brewery/taproom in southern Minnesota: Montgomery Brewing in, not coincidentally, Montgomery, Minnesota, population about 3000, “Kolacky Capital of the World”. 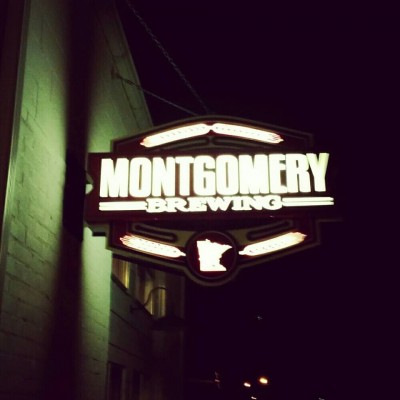 A beacon of hope on a harsh frozen evening

As my tennis shoes found more reliable footing on the ramp leading up to the entry, I saw Brad up ahead, holding the door wide open for me. While I appreciated Brad’s courtesy, my immediate thought was, “if there is anyone in there and they are sitting by that door, they are gonna be so angry at us out-of-towners.”

Nothing could be further from the truth.

As my glasses defogged and my cheeks thawed, we found ourselves in a warm, cozy taproom that was full to the brim. Of the wooden tables and chairs I could see, they were all full of groups of people. I looked, but did not see or hear anyone cursing our arctic-blast entry. Instead, the room was warm and full of laughter from everyone I could hear. Nobody was giving Brad and I that ‘oh look strangers!’ glare that you get when you enter a place always populated by the regulars. Of the people who were curious, they were all admiring Brad’s custom brewery-patch jacket. 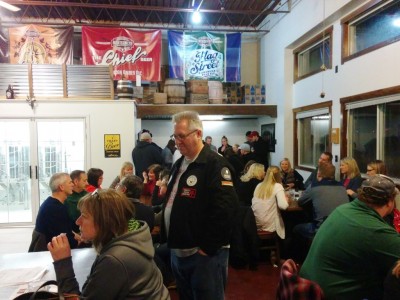 A lot of interesting beer history all over the place. That’s Brad in the center.

The taproom was front-sectioned off from a larger interior which boasted the popular creamery-brick/industrial steel siding style. Behind a service counter made from stainless steel worktables were custom-built, white coolers with clear doors showcasing seven 5-barrel stainless fermenters inside. Over it all, a green chalkboard held information about the beers on tap and for sale.

Just as soon as my glasses cleared enough to read, I searched the chalkboard and found the word that I wanted to see: flights. Nothing makes me happier than finding out I can try one of everything available in affordable, small portions. The flights were served on a thick wooden tray with counter-sunk holes to hold the sampling glasses. Brad was already ahead of me, ordering his. 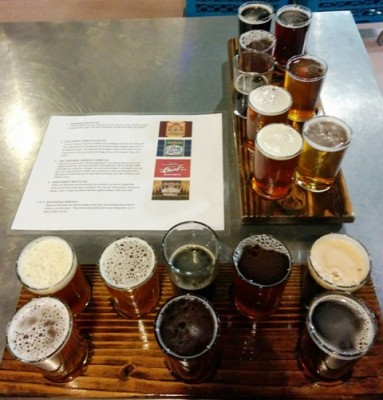 A flight of 8 on a tray built for 7 means you carry it carefully.

My second, now in more-in-focus look around the taproom revealed framed pictures containing some of the building history, beer culture, and even a large print of Sisyphus Brewing’s mural. Everyone seemed happy, and eruptions of laughter were common from several larger groups. However, the room had no place left to sit. I started getting concerned that we’d have to stand and balance our flight trays in one hand and drink with the other: not ideal.

Just then, a group stood up and made preparations to go. Brad made an instinctive bee-line for the just opening table. In fairness, Brad is a frequent patron of Dangerous Man, and his skills at finding a place to sit in that always bustling taproom are finely honed. I saw beer left on the tables they’d just stood up from as the taproom staff quickly bustled over to clear it. I got this odd vibe that these folks just decided to call it a night to give us a place to sit. As they pulled on their coats and we took ours off, we thanked them for the space and they in turn encouraged us to enjoy our beers.

It was a very Minnesotan-nice moment.

While we worked through our 8 beers, people came over and asked how we were, where we’d come from, and what our favorite beers were. To some end, I thought that maybe my reputation as a blogger was gathering us additional attention, but in reflection I think people were very friendly and really wanted to talk to us… and ask Brad about his brewery-patch jacket. 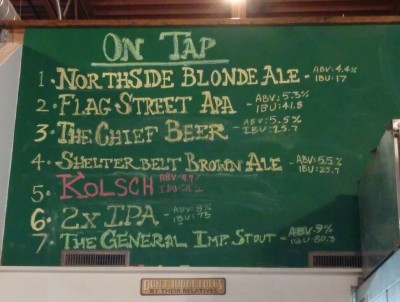 The little sign at the bottom says, “Don’t judge folks by their relatives”

This is a beer blog, so I suppose we should get into that. I found all the beers very drinkable. I am not a beer sommelier, nor certified cicerone, never been a BJCP beer judge. I know what I like, and with my preference for porters and stouts, I found The General (an American Imperial Stout) to be my favorite (see image for the tap list). They also had some wax-dipped 750ml bottles of this beer that had been bourbon-barrel aged and, from the sales I observed and the man-that’s-good-beer sounds Brad made, very good and in high demand. I had noted the crowler machine as we came in, and had I to do it over would have asked for a crowler of The General to go.

The Saturday closing time of 9:00 PM arrived quicker than I would have liked. The taproom started clearing out about 8:45 PM and Brad had just about finished his tray while mine looked largely untouched. I guess I spent too much time talking to folks and not drinking beer. As we made preparations to leave, two local fellas we’d been talking to suggested an ‘interesting’ pizza place in town if we were hungry before braving the below-zero drive back home. We took their advice and, well, the experience we had there would fill another blog. I will say that the staff at Pizzeria 201 were obviously hoping to clean up early when we arrived close to their closing time, but they found the pizza oven was still hot and they served us happily