It began with a question: I asked Andrew Schmitt how could we do an interview but not make it seem like just another interview? You know what I mean? I ask a prepared question, they give an answer, we write it down and publish it. Boring. Been done. To death. There’s no sense of… drama… or danger. How could we have a dangerous non-interview?

The answer was: Let everyone else ask any question they want and do it live on the internet. 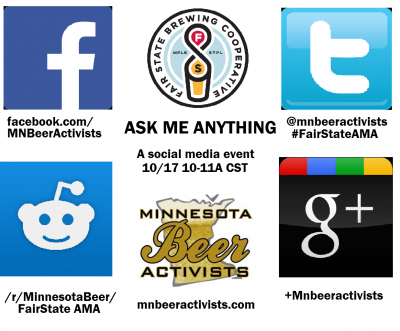 I made this all by myself – can you tell?

And that’s exactly what we did by hosting an AMA – an “Ask Me Anything” event – on Reddit: the entertainment, social networking and news website. Users submitted the questions, and Matt Hauck, D. Evan Sallee and Niko Tonks from Fair State Brewing Cooperative answered them. Nobody has the ability to control the questions. Nothing is off the table.

Drama. Danger. We haz it. I tell you straight up: I was nervous. When you’re on Reddit, anything you post has a chance of going internationally viral. There is no ‘only this group sees things’ setting. Wide open. Uncensored. One misplaced statement, and suddenly tens of thousands are repeating it everywhere. Andrew, who agreed to moderate the event, told me not to worry.

What transpired over the next hour and a half is out there for all to see, raw and unedited, at this link.
There was some more at the IAMA forum, here.

There’s not a lot of benefit to repeat every question and answer here, but I will highlight some. A lot of good questions were asked – and yes, some tough ones, too.

In an AMA, sometimes the questions don’t get answered. It is, after all, an “ask” me anything, but there is no promise to answer everything. But as the event wore on, these three were focused and collaborated to answer as many as they could. Even the question about rating Evan’s butt got a reply (oh, NOW you want to check out that link. I see how it is). 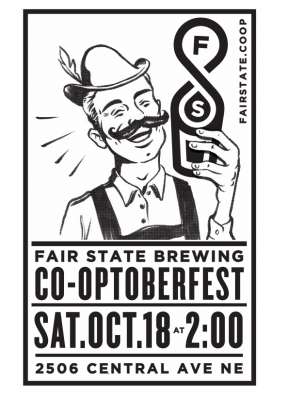 He looks so happy, but is that drinkable?

As we gathered in the oddly conversation-stilled FSBC taproom in NorthEast Minneapolis, the long periods of silent typing reminded me a lot of hours spent in the computer labs in school. From the back, sounds of crews putting up the large party tent for Saturday’s Co-optoberfest echoed off the brickwork. Piercing the silence most often was the question ‘Did you see this question? Who wants to answer it?’

Things were going quite swimmingly until the first tough question hit. They all seem to see it at the same time, and hands came off keyboards. CraftBrew asked, “Worried about the crime in your area?” The question continued with an account of something that reportedly happened, posted in a closed Facebook group. It wasn’t the first time I’d had heard of this, having chatted with many a patron in many a taproom in the area.

Active and – I’ll say passionate – discussion between the trio commenced, breaking the marathon of silent typing that we’d all been running. After a few minutes of debate, I interrupted them. “You don’t have to answer every question.” 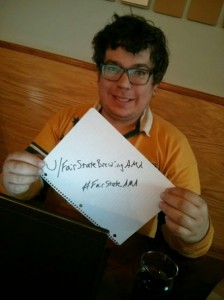 “No, I want to, this is bull****,” said Niko, and began typing his reply. Did you know that typing sounds differently depending on your mood? It does. Happy sounds like “ticka-ticka”. Intense sounds like “TAPPA-TAPPA”. Niko was TAPPING. I glanced over at Andrew, who was working on expanding the chat to the international IAMA channel of Reddit. He seemed non-plussed. So, I worried for both of us.

When Niko was done, Evan and Matt read his response before he hit save. Andrew and I were on the other side of the table, we didn’t see it. “Click” said the mouse: it was saved. I hit refresh to see the reply, trying not to panic.

If this was Buzzfeed, I would now give you a link to that conversation with this headline: “YOU’LL BE STUNNED AT WHAT THIS HEAD BREWER SAID NEXT”. But it’s not. Go read it for yourself. #nospoilers

As the influx of questions slowed, you could hear the business waking up around us. Smartphones chirped, voicemails were checked, the bar phone began ringing. We chatted about Co-optoberfest. A member called, asking how to absentee vote for the election on Saturday. Matt offered Andrew a tasting of the 9… 10? beers they had tapped up. 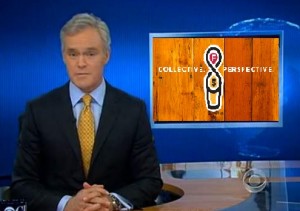 Check out those MS-Paint skillz

When we agreed that the one-hour-turned-nearly-two hour event was over, I began packing up the laptops. I think I heaved a sigh of relief – no epic failures, no blatent blunders, no Scott Pelley closing the CBS Evening News with: ‘And our last story comes from a small cooperative brewery in North East Minneapolis…’.

My favorite question? The MacMan asked, “What are your thoughts on a nacho-infused beer? Can we make this happen?”. Any other answer other than “yes, right now, we will do it now” made me sad. You and me, MacMan: simpatico.

My favorite answer? Frozen_Barbie_Head (not their real name… then again, who am I to say) asked. “How do you feel about hipster beers? ie trendy beers?”

FairStateBrewingAMA: I’m wearing a flannel shirt and I rode my bike to work today, so clearly, AWESOME. Oh yeah and I have a huge beard.

One thought on “Fair State Brewing Cooperative AMA – Behind the Scenes”