It seemed somewhat inappropriate to celebrate a month of Minnesota beer without ever stepping into a brewery to do some sampling. So we’ll wrap it up on this high note with a visit to Steel Toe Brewing in St. Louis Park. Plus, it’s good for us to get out of the house sometimes, right?  Right. 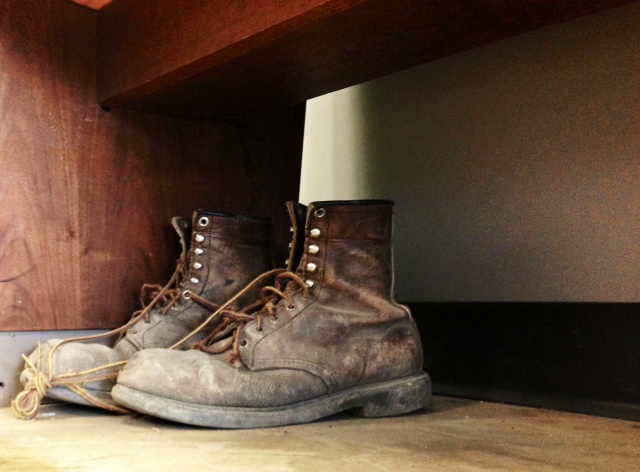 An added incentive to visit: an inherited growler from my dad that needed filling. Because every time a growler goes empty, someone buys a case of Bud. You didn’t know that Old Wives’ Tale?  Me neither. But it sounded sort of scary in my head. 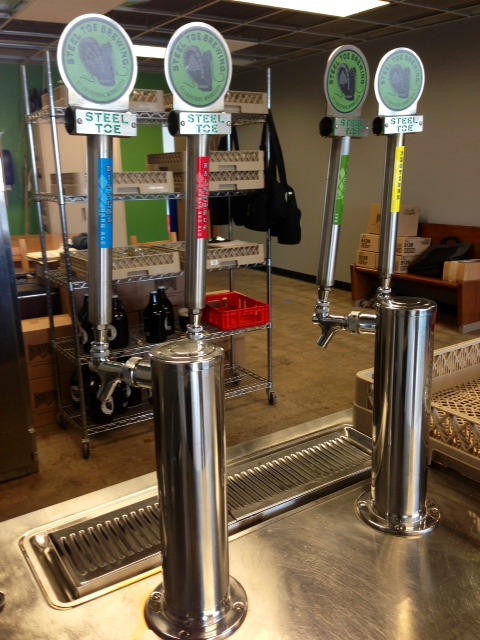 Jason believes in tasting beers in order of bitterness (low to high) and with the selection he has, I can’t say that I blame him for that judgement call. 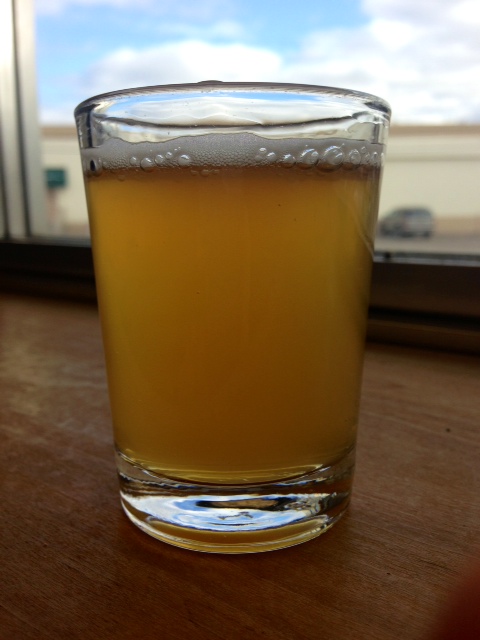 This beer is described as having a slightly sweet malt flavor and floral hop aroma. Unfiltered…

Kat: I think this has a very pastoral, grassy scent that carries through the first sip. It’s a radiant golden color and the unfiltered component looks really lovely in the light. I know beers aren’t brewed to be “pretty”, but this one is. The first taste shows me a very light beer with some decent bubbles. Nothing about it is overpowering – it’s a very mellow beer that builds at the back of your mouth over time. There’s some citrus brightness here, but I’m more encouraged by a really great malt-hop balance that makes this so easy to drink.

Marcus: I’m not getting a lot with the initial sniff on this. Extremely hazy, because it isn’t filtered which gives it a great golden color. The taste is extremely mild with a pretty clean finish. There’s a bit of flavor left behind but nothing remarkable. It feels sessionable for sure. 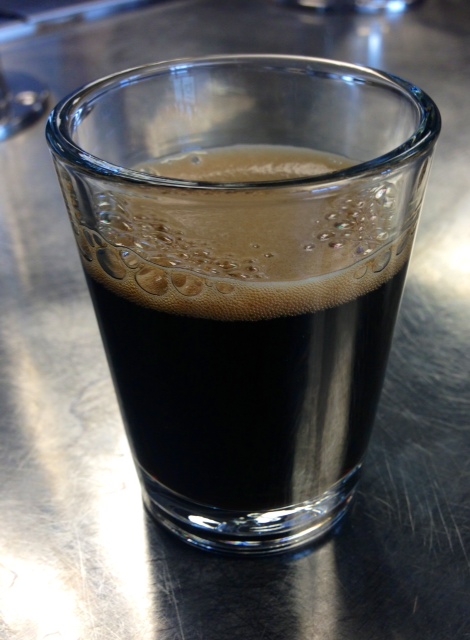 Said to be bold and complex from a tremendous amount of roasted malts, yet smooth and rich from the addition of oats.

Kat: This beer has no secrets whatsoever. I’ve got a bit of a cold going on and I’m still on the border of being overpowered by the malty, roasted coffee scent. This beer is so thick that, even when held up to the window, no light passes through, which gives you an idea of just how dark its color is. It has a more bitter flavor than I was expecting, but when you think about the coffee aroma on the nose, it’s more fitting. It really sticks to the roof of your mouth after every sip.

Marcus: I mean, it’s basically black when it comes to the color. You can’t really elaborate on that.  It has a really strong malty smell that borders on the edge of bitter and burnt. The beer tastes the same as it smells, but I would say that the nose is stronger than the actual flavor, strength-wise.  For as much as this beer should feel “heavy” when you drink it, I’m surprised by how much lighter the mouthfeel is. 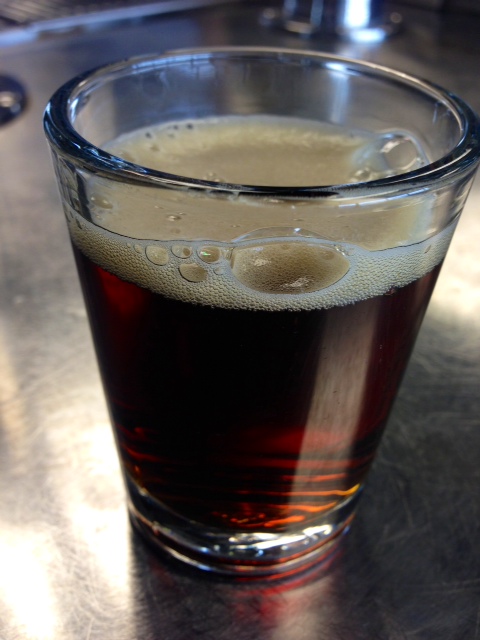 Said to be brewed with caramel and dark roasted malts then doused with a torrent of hops.

Kat: This beer is a deep amber red, bordering on maroon. I’ve been consistently overwhelmed by red ales over the course of my drinking lifetime, so I was looking forward to tasting this “double” version. It is so bitter, and so hoppy. After that first hoppy bite, the richer, roasted flavor rolls in. Kind of like a tag team. Exactly like a tag team.

Marcus: If you blindfolded me and told me to give this a whiff, I would tell you that it is an IPA because this beer is so hop-forward. Instead, you give it a whiff and see a red beer sitting in front of you. The expression of the hops’ bitterness is really great here – sometimes things can be too bitter and this beer doesn’t go there. The taste really stays with you. 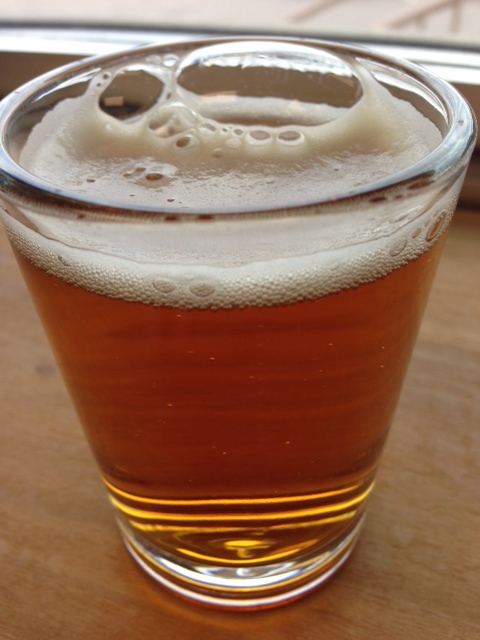 What does Steel Toe have to say? “We take prodigious amounts of hops and add them any chance we get to this Northwest style IPA.”

Kat: This has a buttery caramel color that is startlingly clear. For how hoppy I was expecting this beer to be, the hop aroma is much more…gentle. Sweet, almost. I think that means that they were just saving their attack for the main event. Once you’re drinking it, this beer is appropriately bitter and all hop. Personally, I seem to be feeling it the most in the back of my mouth.

Marcus: To me, this beer sits on the gold-orange border. The nose is a very floral hop scent.  Once you start drinking, the bitter flavor starts crashing over your palate and it really doesn’t stop once you’re done. You can taste the malt in here but not because it’s balanced, more in the sense that it’s a “contrasting color” to the hop flavor. It’s pretty bold in its intentions.

Well, if you want the truth, the whole truth and nothing but the truth so help you God, we’re more than happy to give it to you.

There wasn’t a bad beer in the bunch and we’re refusing to play favorites. We would view the friend who offered us a pint of Dissent in the same way that we would regard the one offering us Rainmaker. Which is to say that we would like to meet these friends and down one together.