Introducing Reviewbicle, a regular monthly feature by the guys at www.brewbicle.com. Every month Dan Belfry and Jon Buck will feature something from their very own Brewbicle cellar and tell you all about it.
-Andrew Schmitt

Being the designers and creators of Brewbicle, we have a special interest in the aging of beer. It is what
drove us to begin creating the Brewbicle almost 2 years ago and what drove us to start our company
in March of 2012. Aging beer is a wonderful hobby; it is equal parts patience, experimentation and
experience, and can provide the most enriching beer moments when those three things align. And while
this hobby floats on the fringes of the craft beer world, it is quickly growing and gaining interest. With a little self-control you can build a cellar of your own hand-selected gems to enjoy with friends and family.

This article isn’t going to dig into the how’s and why’s of beer aging or cellaring. We will, however, point you to some good resources and information we’ve found to answer your questions. If you want to read
more, go to: http://www.brewbicle.com/beer-cellaring-101.html

For our inaugural Beer Reviewbicle, we’ve selected a Minnesota beer and one that is readily available on
local store shelves at the time of this writing. We’re taking a closer look at Surly Smoke, a smoked Baltic Porter aged in oak, with a comparison of 2010 and 2012 vintage. The 2010, kept in a Brewbicle in Jon’s basement, and the 2012 procured from Jon’s local store shelves have two years between them, which
should provide a nice amount of contrast and highlight development for our taste buds. We started
from the ’12 and drank back to the ’10, which is typically how you would address a vertical tasting from
newest to oldest. Below are our tasting notes: 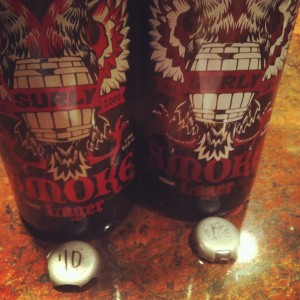 Appearance (’12): Mostly black and when held to light, reveals crimson edges. The head is a light cream
color and developed into a substantial head when poured. Redder than the ’10.

Appearance (’10): Mostly black with brownish edges, very minimal head appears even after a vigorous
pour, the head that does appear is darker and disappears quickly. Pretty clearly the less carbonated of
the two.

Aroma (’12): Campfire/smoke dominates the smell; beyond that, there’s a whiff of cherry or raisin,
some sweet vanilla and some traces of alcohol. Smoke, however, is by far the prominent aroma as one
would assume.

Aroma (’10): Again, smoke is present, but more easily gives way to those cherries and dark fruit and a
hit of the vanilla. There is an over-arching presence of a musty odor, not overpowering or offensive, but
present here where undetectable in the ’12.

Taste/Mouthfeel (’12): There is an upfront bitterness, although quickly fleeting and swept away by the
namesake flavor, which permeates and lingers through the rest of the tasting. As the finish begins, a
dryness comes forward. This could be from the oak tannins or from the roasted malt; between this and
the higher level of carbonation, the ’12 finishes distinctly cleaner than the ‘10

Taste/Mouthfeel (’10): Don’t be mistaken, there is smoke in this one too, but by comparison it is more
subtle and not as dominant. The fruit flavors that were only glimpsed before now have a bigger role,
starting almost right away and not leaving until the end when a sweet vanilla finish compliments the
smoke flavor. The smoke and vanilla linger and finish slowly, with less carbonation to cleanse, the flavors remain alive longer than in the ’12.

Overall Comparison (’12 and ‘10): We thought Surly Smoke was great with some age. The things that
appeared were really amazing and the beer that was revealed two years later was delightful. No longer
enslaved and overpowered by smoke flavor, the other elements of the beer got some time in the sun.
We both highly favored the ’10 for flavor reasons, but this does come with a caveat. The ’10 had some
signs of oxidation starting to show and significantly less carbonation. Our guess is that one or two
years more is probably all the further this should go. Additionally, if the Smoke is what draws you to
this beer to begin with, you may very well like this one fresh, but you’d missing what lies beneath and
complements the Smoke so well.

We hope you found our take on Surly Smoke informative and possibly inspirational to squirrel away a
bottle or two to try come the 20teens.