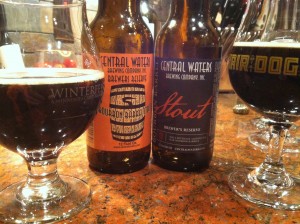 We’re glad to be back for our second month! This is really a great reason for us to start digging in our cellars and finding beer we’ve been saving for one reason or another. The debates over what to open are almost as fun as what we actually drink and, in this case, spilled into the tasting itself (no pun intended). This week we delve into an offering from our beer-loving neighbors to the East, Central-Waters Bourbon Barrel Stout. We have again decided to go with a ’10 and ’12 vintage for this review, which should highlight the development for us. So, without further ado:

Appearance (’12): The pour results in a healthy amount of light ivory head, which quickly dissipates and leaves some signs of lacing. There is very little transparency in this one; when held to the light, the color is a Black/Brown body and reveals some red edges.
Appearance (’10): The pour results in an almost indiscernible difference from the ’12 and the main difference that occurs here is in the color. The ’10 has noticeably more transparency, resulting in a lighter brown body and greater red coloring at the edges of the glass. Not sure what might cause this difference, perhaps recipe variation?

Aroma (’12): Vanilla and brown sugar are forefront and are followed by the dark fruit of raisins. The nose finishes with a bourbon smell and even a slight, but sharp, burn.
Aroma (’10): Bready grains kick things off here, with notably less vanilla sweetness; however, there is actually more dark fruit aroma present after the vanilla gave way. The bourbon burn experienced with the ’12 is still there, but not quite as sharp.

Taste/Mouthfeel (’12): Opens up with sweet flavors of vanilla, raisins and plums, but not in an overwhelming way. The sweetness has some real depth and restraint, and it isn’t cloyingly so. The sweet is entirely surpassed by bourbon and an accompanying burn. The bourbon is backed up to by some grains, which give a dark chocolate and decidedly dry finish. There is a lingering burn, as if you had just sipped some bourbon, which we suspect is tamed by the sweet dryness of the malts. The carbonation, while not visually apparent, was more evident in mouthfeel and gave a cleaner finish to the flavors. The body on the ’12 was less viscous as well and between the carbonation and viscosity, it didn’t allow flavors to linger quite as long as in the ’10.
Taste/Mouthfeel (’10): This one starts sweet as well, but more subdued, with little detectable vanilla and a shorter period of fruit flavor. The transition from fruit to bourbon is a lot smoother here, with less distance between the two extremes of the flavors as they meld. The bourbon never reaches the “in-your-face” flavor of the ’12 and has little detectable burn. The dry, chocolate flavor returns at the end, which makes it the flavor that lingers. In contrast to the ’12, a fuller body and less carbonation gives this beer the ability to linger and fade off gradually.

Overall Comparison (’12 and ‘10): Our discussion about this tasting led us to realize some important factors to consider when aging beer. Jon and I differ as to our preference between the ’10 and ’12. Jon favors the aggressive bourbon and barrel flavors present in the ’12, as he likes the assertiveness and contrast with the sweetness that defines the early part of the ‘12’s flavor. However, I prefer the monochromatic subtlety which defines the transition of flavors in the ’10. It should also be noted that Jon is a more versed and avid bourbon/whiskey/scotch drinker than myself. I do enjoy these beverages as much as the next person, but almost invariably order them on the rocks. There is also the factor that I don’t really enjoy these drinks until after the first few sips, as my palette adjusts to the burn that accompanies them. Jon likes his straight-up, and seems to relish in its’ intensity.

This leads to an important question which you should ask yourself before deciding on aging barrel-aged beers, specifically bourbon barrels: will I enjoy it more now or later? Jon and I both liked each beer, that should not be misconstrued, but we favored them at different ages. Jon will continue to age his CW BBS, but may have a few more fresh before putting them away. My plan is to continue my drink one and cellar three regimen, and most likely age them longer than Jon will.

This is what makes cellaring great: being able to evaluate and strategize your cellar contents and tailor it to your palate’s preferences. Although, that could just the beer geek in me talking too…