To whom it may concern,

My name is Al McCarty, and I have been an avid follower of the craft beer scene nationwide for over 20 years, and a bar industry professional for nearly twenty years. I have been the bar manager of the Blue Nile restaurant in the Seward neighborhood of Minneapolis for almost fifteen of those years, and in that role I have been a pioneer in promoting craft beer at this establishment, long before the current boom of local breweries and beer bars began.

In both of these aspects of my life, I have seen that the lack of Sunday sales of off-premise liquor and beer sales only serves to make Minnesota appear to be a backwards community. Currently, Minnesota counts among only a dozen states in the union that prohibit Sunday liquor sales. We feel proud to consider ourselves culturally, socially and politically progressive, yet we are in the same company as states such as Alabama, Tennessee, Oklahoma, Utah, Texas, and Montana. Many of these communities are our opposites when compared to politics, cultural life, and literacy. Minneapolis was recently named the #3 most literate city in the nation, behind Washington, D.C., and Seattle, Washington. And yet a literate, educated, sophisticated beer drinker in Minneapolis cannot visit a store and buy a well-crafted, sophisticated ale on a Sunday.

The local beer scene has exploded in recent years, with breweries and brewpubs popping up everywhere and striving, positively affecting the economy and the community, Yet, by law, we are still far behind. I was once visited at the Blue Nile by a man from Kansas who drove hundreds of miles for a taste of Surly Darkness Russian Imperial Stout. And yet, he reminded me, he could not walk into a store and buy a bottle in Minnesota on a Sunday, although in Kansas, he could. “What’s wrong with Kansas?” some ask? Not this.

When I point out to some people that we can’t do what some can in Kansas, I hear an astonishingly absurd reply. “Do we want to be like them?” In this case, yes, we do. We want to be like them, because we look backwards, primitive and un-progressive in comparison. In North Dakota, in Iowa, Kentucky, Louisiana, Idaho, Nebraska, and all across the United States of America, sophisticated, educated consumers have the liberty to walk into a store on a Sunday and purchase a bottle, a 6-pack or a growler for their own private consumption at home, but in educated, sophisticated, progressive Minnesota, we are denied that liberty.

We are ahead of Kansas in beer, but in this one small matter whose opposition is antiquated and absurd. Blue laws have not place in the 21st Century. This is a diverse, cosmopolitan, worldly community of many cultures, who should no longer be constrained to the rule of a conservative religious culture. The arguments against allowing Sunday sales are flimsy and baseless. “You can always plan ahead and buy on Saturday,” I hear. That’s not logic and it’s not a sound argument. Why should we have to force this upon ourselves, as consumers? Some of us do not have the luxury in our work schedule to visit a liquor store to provide for our Sunday drinking plans by checking in on Saturday. These arbitrary limitations on our liberties as consumers do not hold water. Arguments against Sunday liquor sales by those in the packaged beverage world seem to only be based on an effort to do have to go to work on a Sunday, or to not have to compete with anyone else who is willing to do so. There is simply no other industry or craft who is limited by these laws, outside of car salesmen, and none of them have any problem with opening or not opening on a Sunday. 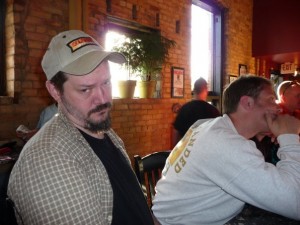 So, ladies and gentlemen, esteemed legislators, I would hope you would consider how current laws affect the economy, as well as our communities standing among or against others in light of these same laws. Do we want to stand in the same circle as Alabama, Mississippi, Oklahoma, Utah, or Texas, despite how we appear in so many other regards, or do we want to allow for this most simple thing, the freedom to enter a store on a Sunday and buy a bottle of beer or wine for home consumption?