Irish I was Irish. I’m about a pinch. But that doesn’t mean I can’t share in some of the grand traditions of this beloved holiday. I mean, I love the color green! I like gold! Shaleighleigh is fun to say! And of course- I love beer!

This started as just a recipe for corned beef. But then I had to go crazy and put my own spin on things.

It started with the corned beef. I just got a small tip roast and decided to go with an easy traditional recipe. And then I remembered…I had a couple pounds of Simpson barley in my brewing stash. What could I do? I had to make a quick version of malt vinegar for my brine. And I was just too lazy to go to the store for some!

I crushed the barley in the food processor, releasing as much sugars as possible. I added the vinegar & beer and reduced to about half. I gradually added the other cup of beer to thin out.

I placed the beef tip into a sealable container, poured the vinegar over & added traditional pickling spices & one more beer to cover. It sat overnight. It could be done days in advance to tenderize further.

Corned Beef:
I followed the recipe below from the Internet.

I placed the 3lb. beef into a Dutch oven with the brine. I added enough water to just cover the beef. I added the packet of spices included with the beef & an extra bay leaf. Bring to a simmer.

It’s 50 mins per pound of meat. I added carrots & red potatoes on top of meat in the 2nd 50 minutes. They turned out perfect! (I opted for no cabbage.)

After the time was up, I removed the meat & let rest on a cutting board. I sliced after about 15 mins. Tender & juicy! Serve with a spicy mustard & cooked veggies.
Recipe Source

But that’s not all….
The best part of making corned beef is having leftovers for hash!!! 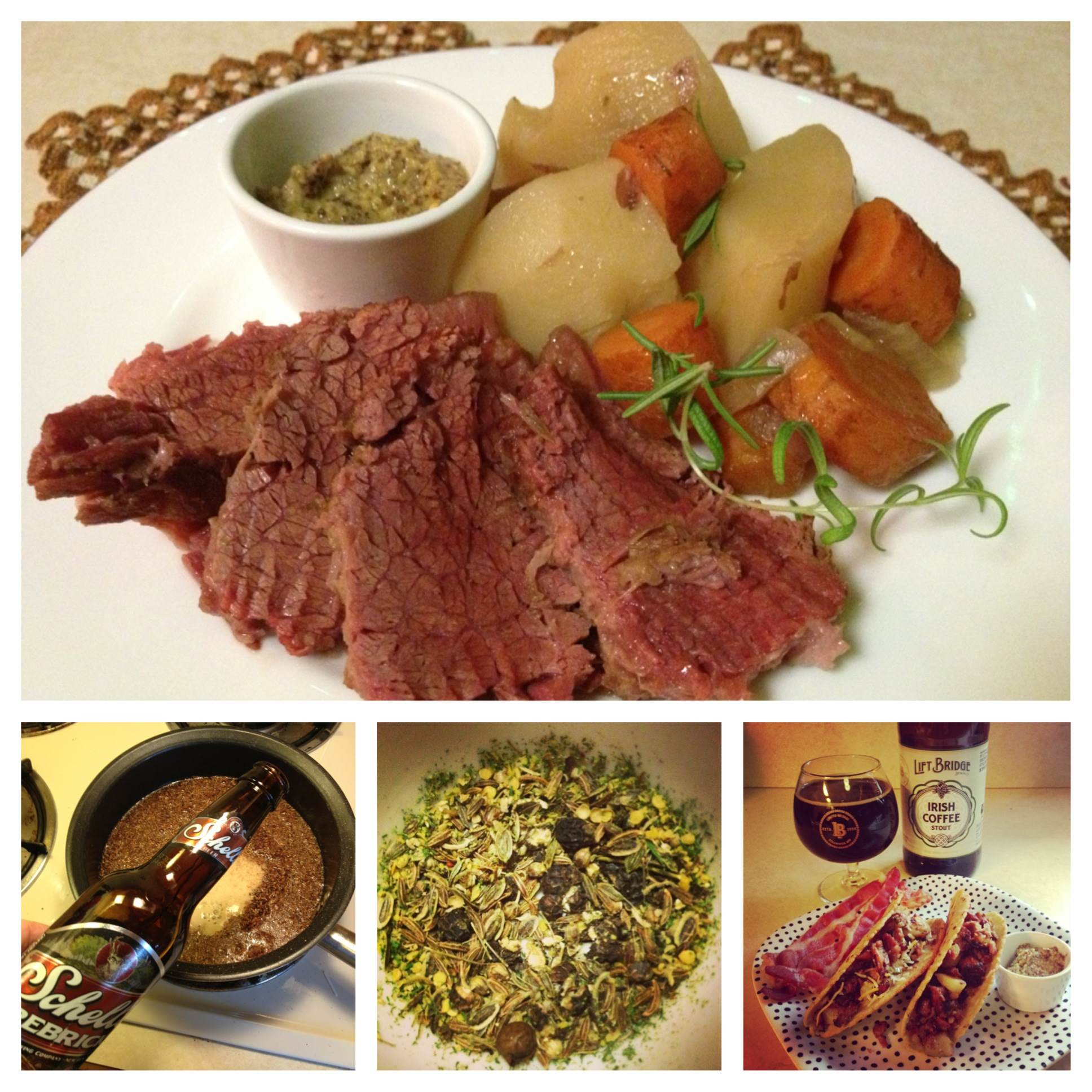 Cook in a skillet med-high until a nice crust forms. Keep turning until all has been fried. About 15 mins.

We got kick ass homemade corn tortillas- fried them babies up into taco shells & viola!

Served with an Irish coffee stout? Oh yeah….it was a tasty morning!!

**I used Schell’s Firebrick for the brine. I would recommend using a stout, as directed on the recipe. It didn’t give deep enough notes. But a damn good beer to drink!!

**A beautiful pairing (and beer): fresh
Lift Bridge Irish Coffee Stout & corned beef hash with bacon on the side.
Need I say more?

Melinda is a beer enthusiast seeking out which food and beer will join forces next... No beer is safe!! She is an active member of Barley's Angels-MN, an employee of a local brewing company, and a novice home brewer.