No More Minnesota Nice – Give us our #EnjoyBy #MN 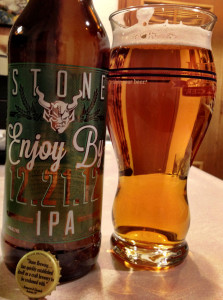 In Minnesota we have waited patiently, as most Midwesterners do, for Enjoy By IPA from Stone Brewing Co. We don’t want to complain or cause too much of a ruckus here in the Midwest but that might be part of the problem.

See the whole point of the #EnjoyBy campaign is to vote for the beer in your City or State. Stone wants to know who really wants this beer because they need to be certain that we can consume it by the date printed on the bottle. Yes, I know this is Minnesota and we love our IPA’s and for those of us living here we all realize there won’t be a bottle left on the shelves but we still have to convince Stone. So, to get Stone’s attention you simply need to put down your beer and start Tweeting. Be sure that your tweet includes the following two hashtags: #EnjoyBy #MN

Next, go to http://www.stonebrewing.com/enjoyby/ and click on Vote at the top of the page which will take you to the Vote Now button. Click on the Vote Now Button and the vote with your E-mail address and go ahead and enter your Gmail address along with a MN Zip Code. Then vote again with that Hotmail account you haven’t used since college.

Go ahead and get vocal Minnesota! Tweet a few times a day, vote once with every e-mail address you have (yes we know you have a few) and reach out to the following guys on Twitter and let them know you want #EnjoyBy #MN

Stop reading this and get out and Tweet that is unless you really want to drive to Iowa to get your fair share of EnjoyBy!

Please feel free to leave any comments below, I’d love to hear your take on #EnjoyBy and other beers you want to see from Stone. Oh, and a special thanks to @JasonBGP from beergeno.me for the #EnjoyBy photo above. Yes, he’s lucky enough to live in Iowa…

Tucker Pearce writes for TwinCitiesCraftBeer.com, a site devoted to beer sold or produced in and around the Twin Cities. Tucker can be found on twitter at @Pearceweb