The anticipation of getting on a plane to Denver, Colorado, to pour four beers we brewed in Rochester, Minnesota, was substantial. Three GRBC staff members and two volunteers left the day before the festival began. We hit the ground running in Denver. First order of business – picking up festival badges for the team. The GABF volunteers emphasized again that the badges are not replaceable (at all – lose them and you don’t get back in). That’s a lot of pressure for an event with 3 days of unlimited samples of some of the best beer in the country. But we did it!

Greetings from the @grandroundsbrew team at #gabf! We are getting the day started “properly” out here in CO. Proper pints of cask ale are going down fast at @hogshead54 with the team from @fairstatecoop. Cheers!

The Great American Beer Festival hosted the brewer’s gathering the night before the event begins at Hard Rock Café – a blocked-off VIP area with nibbles and beer flowing and rock stars of the beer world in all their hoodies and bearded glory. 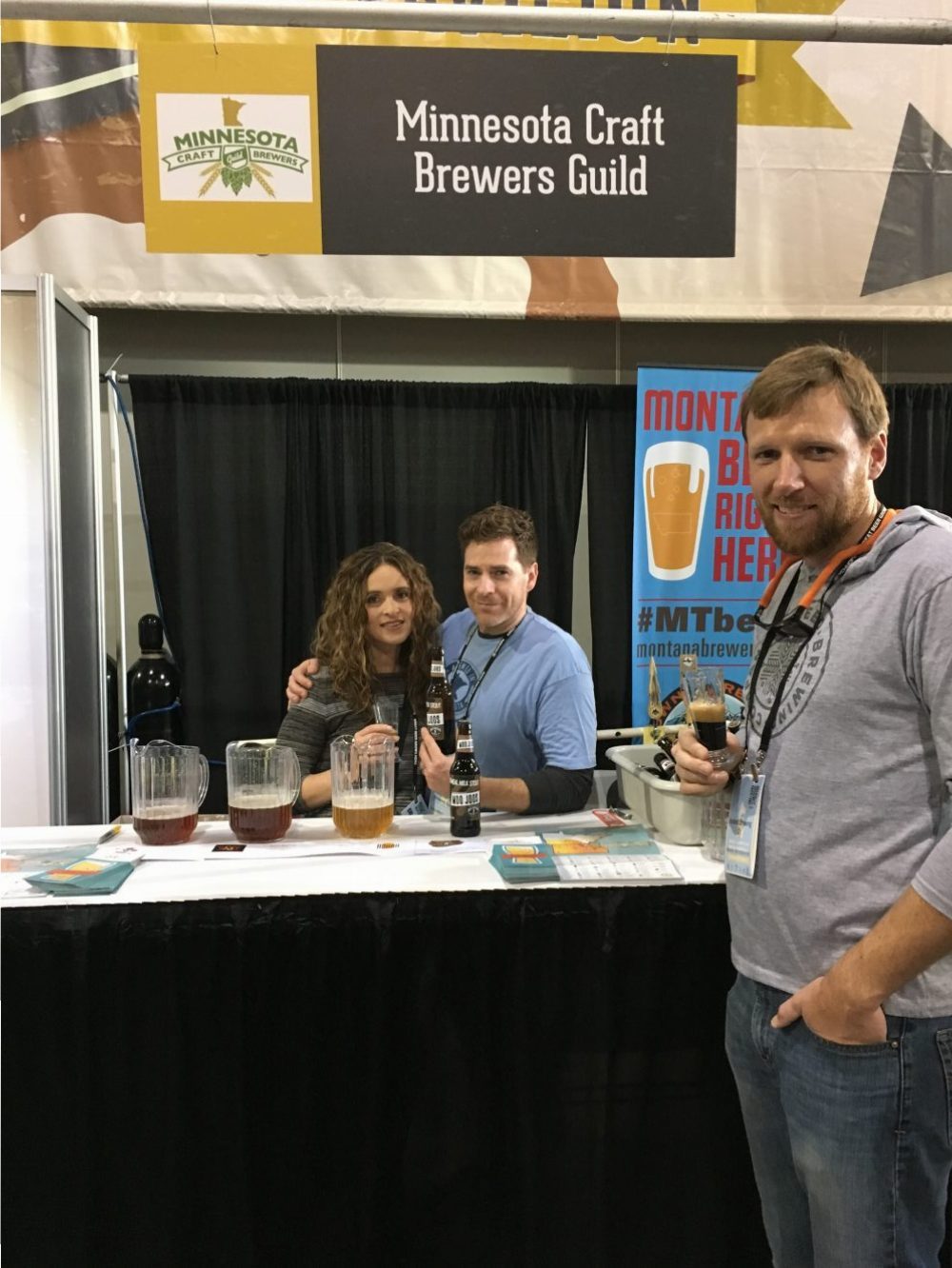 Thursday morning, our crew headed to Snooze in the Union Station for breakfast, but so did everyone else, and a 1.5 wait time led us to Mercantile – no wait, coffee, bloody marys, bahn mi sandwiches. Great way to start the day. We headed to the convention center to get our bearings and check out our booth in the Brewpub Pavilion. Impressive to see the number of volunteers and organizers – 3600 in all.Have to say, it does feel very rock-staresque walking past the queue with your brewer’s pass.

The Brewpub Pavilion was made up of 24 brewpubs from across the country, including our friends from Town Hall Brewery in Minneapolis. You find out you’ve won the lottery to pour at the fest in the summer, and in early September, they ship you empty kegs from Microstar. You fill the kegs, and the Minnesota Brewer’s Guild coordinates a cold storage truck to drive all the Minnesota beer to Colorado. Surly Brewing was nice enough to coordinate pickup and storage – cheers! Each keg is carefully labeled, and you find out later how this helps keep things running smoothly. The Brewpub Pavilion is smack dab in the center of the action – great location with high visibility and plenty of traffic. Behind the scenes, there are multiple five-gallon buckets and a series of PVC pipes supporting taps and gas lines (with quick disconnects that are linked in series to the “mothership” CO2 tank for the Brewpub pavilion).Everyone has the exact same set up. It’s an intricate, finely tuned system of buckets, PVC and hoses. By the time we return at 4:30, the kegs were in the buckets full of ice. It’s almost too good to be true – no jockey boxes, no kegs to lug around, no lines to clean. Slick. 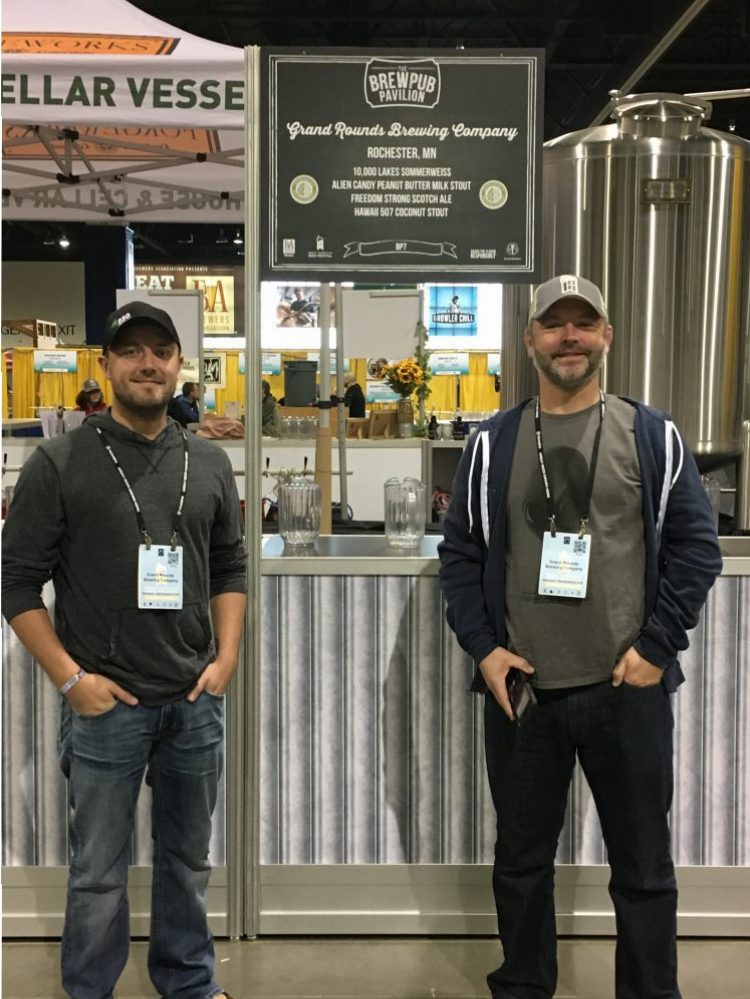 All five of us were milling around behind the counter prior to the flood gates opening. Sam Calagione, founder of Dogfish Head, casually walks by. Legend. It’s too exciting to stand around, so a couple stay behind to take the first shift at the booth and everyone else tries to get the lay of the land and see where our favorites are. The taps absolutely do not get turned on until 5:30, but there were a couple of shops that were pouring from bottles that had lines forming and no one slapping their wrists. (Rare Barrel, Lost Abbey, and a few other top notch samples were had pre-game). There were already lines forming made up of industry people and volunteers, and it’s not difficult to see why breweries like Funky Buddha had poured their limit by 7:30 (event ended at 10:30). 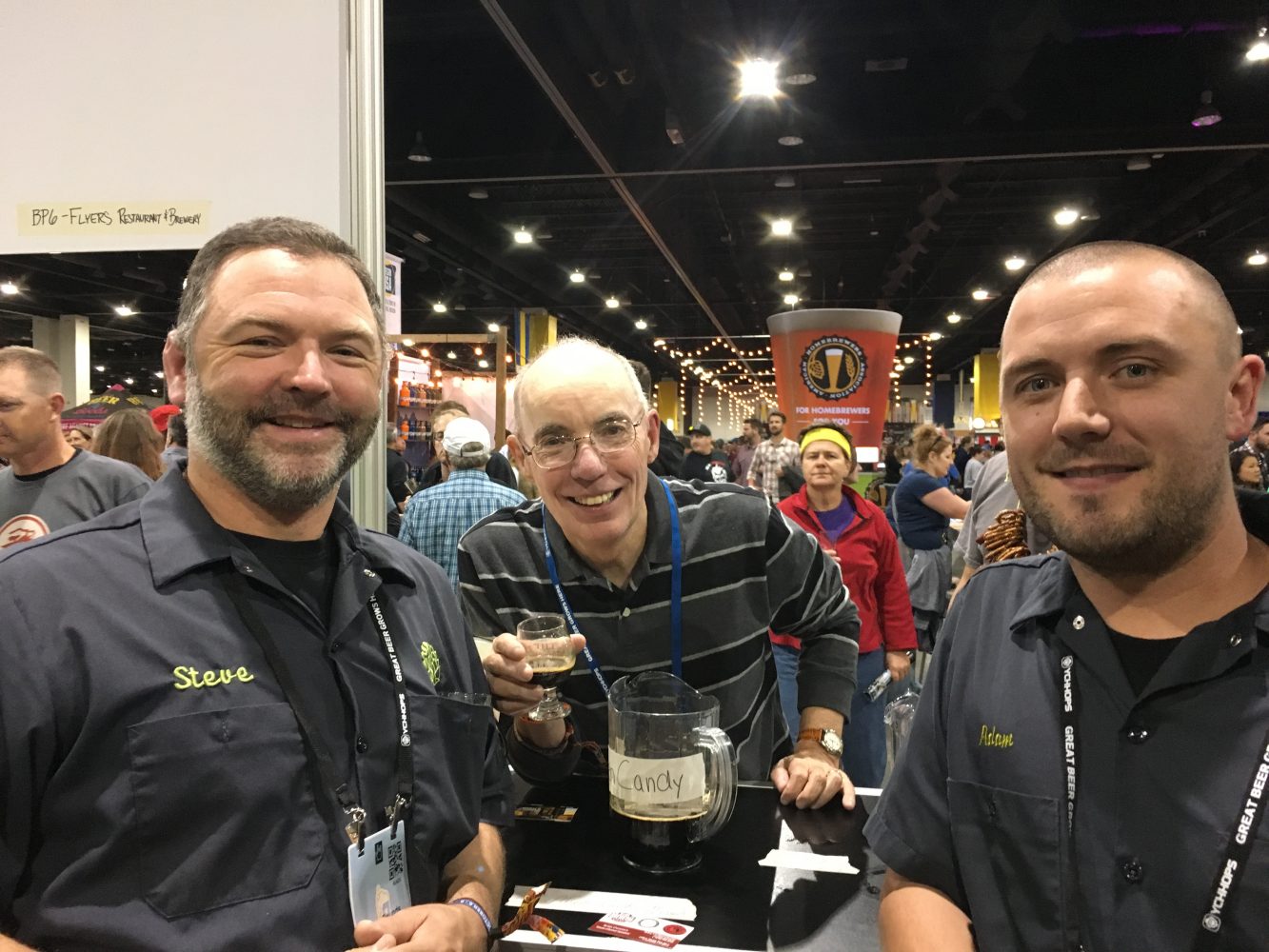 The next two days were more of the same. We did get to visit a few Denver breweries – Hogshead Brewery which specializes in cask-conditioned beer, with t-shirts that read F@#K CO2. The beer was not only great but for us brewing folks it was free! – thanks to our friends at Five Star that were sponsoring this “work “event. At Hogshead we bumped into our friends at Fair State Brewing Coop also busy “working”. We also visited Call to Arms Brewing – fantastic beer, great beer names, and taproom. But alas we felt the calling from the convention center and had to head back to downtown Denver to do what we came to do: pour beer (and drink a little!). 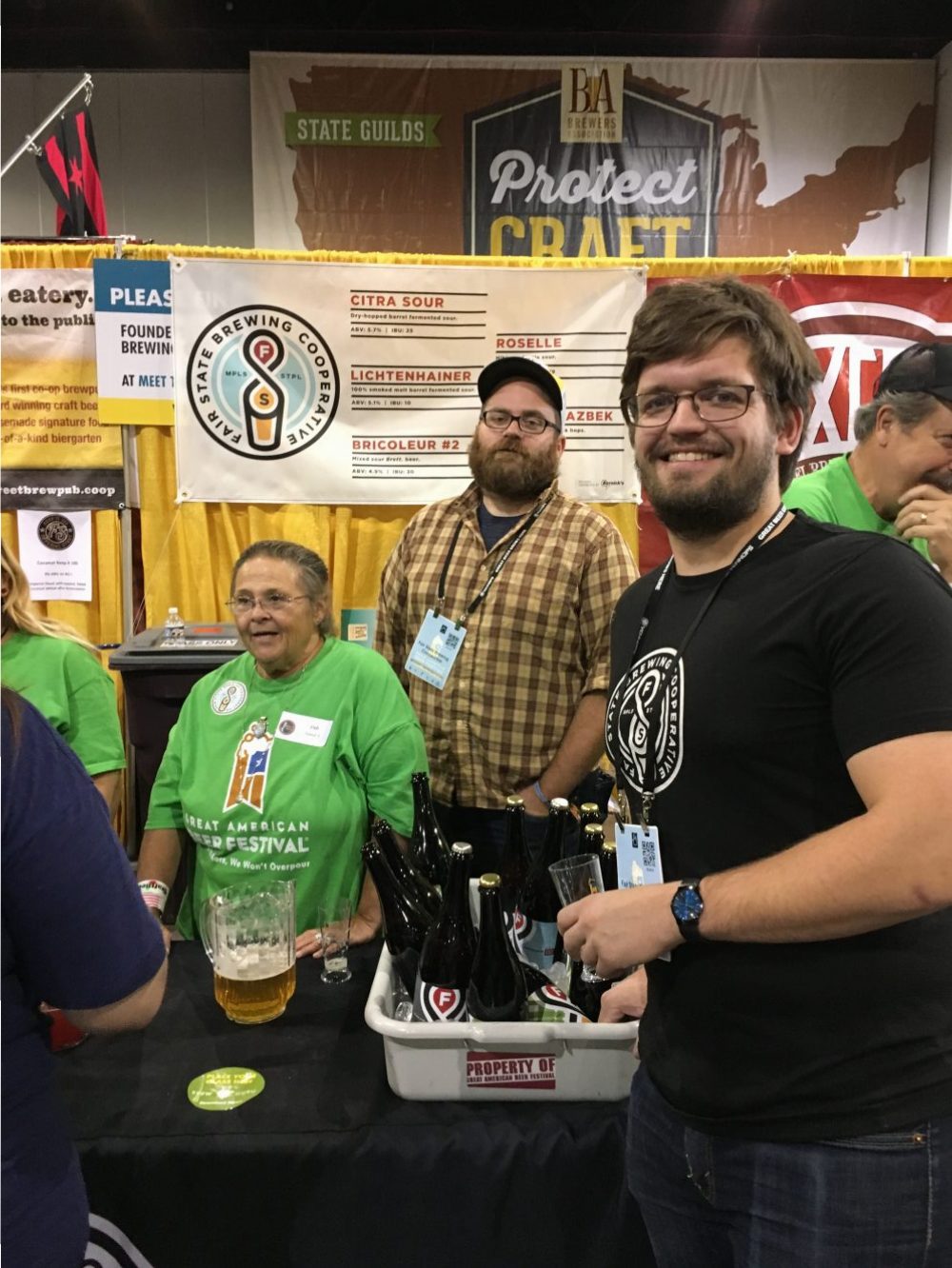 The final day of the Great American beer Fest culminates in the amazing three-hour ceremony and presentation of medals for the ultimate beer competition in the United States. This is the Oscars of the beer world, where the Brewers and brewing staff are recognized for their efforts and get to jump up on stage and celebrate with not only a medal around their necks but a fist pump from the beer god and originator of the Great American beer Fest – Charlie Papazian. It’s an amazing spectacle.

It’s not quite as straightforward as you would think. Entering beers in this particular competition, with almost 100 categories of beer, you better make sure you know where your beer belongs and is it true to the style guidelines. We submitted four of our own beers, and although we didn’t win a medal we are looking forward to getting some constructive feedback and we’re very excited for our fellow Minnesota breweries who did win medals and made our state proud.

Standing ovation for the man who started it all, Charlie Papazian. Thank you for 35 years of #GABF!

I love brewing beer . Brewing beer is hard work. Three days at GABF makes it all worth it. Brewing is not a glamorous job. Manual labor and long hours, a lot of time spent cleaning in a hot brew house and cold room. You’re sweaty, you’re dirty, you’re tired. Having people taste the beer you make and smile makes you keep going. The three days at GABF are about as glamorous as the beer world gets. You can take all your beer books and have them signed by the authors who penned their expertise on brewing, yeast, hops, water etc ! You can chat with and get your picture taken with the rock stars of the beer world! You get a backstage pass to an event that 60,000 people rush online to get tickets for, travel from all over the country for, and stand in queues for lengths of time to get in for. Having a line in front of our booth and actually running out of 2 of our beers at all sessions was a pretty amazing feeling.

Another consistent feeling throughout all of the festival is one of amazing camaraderie amongst brewers and brewery staff. There is an intense love for this craft, which is making beer. Everyone is willing to share information and help each other out. It’s an amazing feeling and it truly is an amazing beer festival. I hope to make it back next year, and the year after, and the year after…. 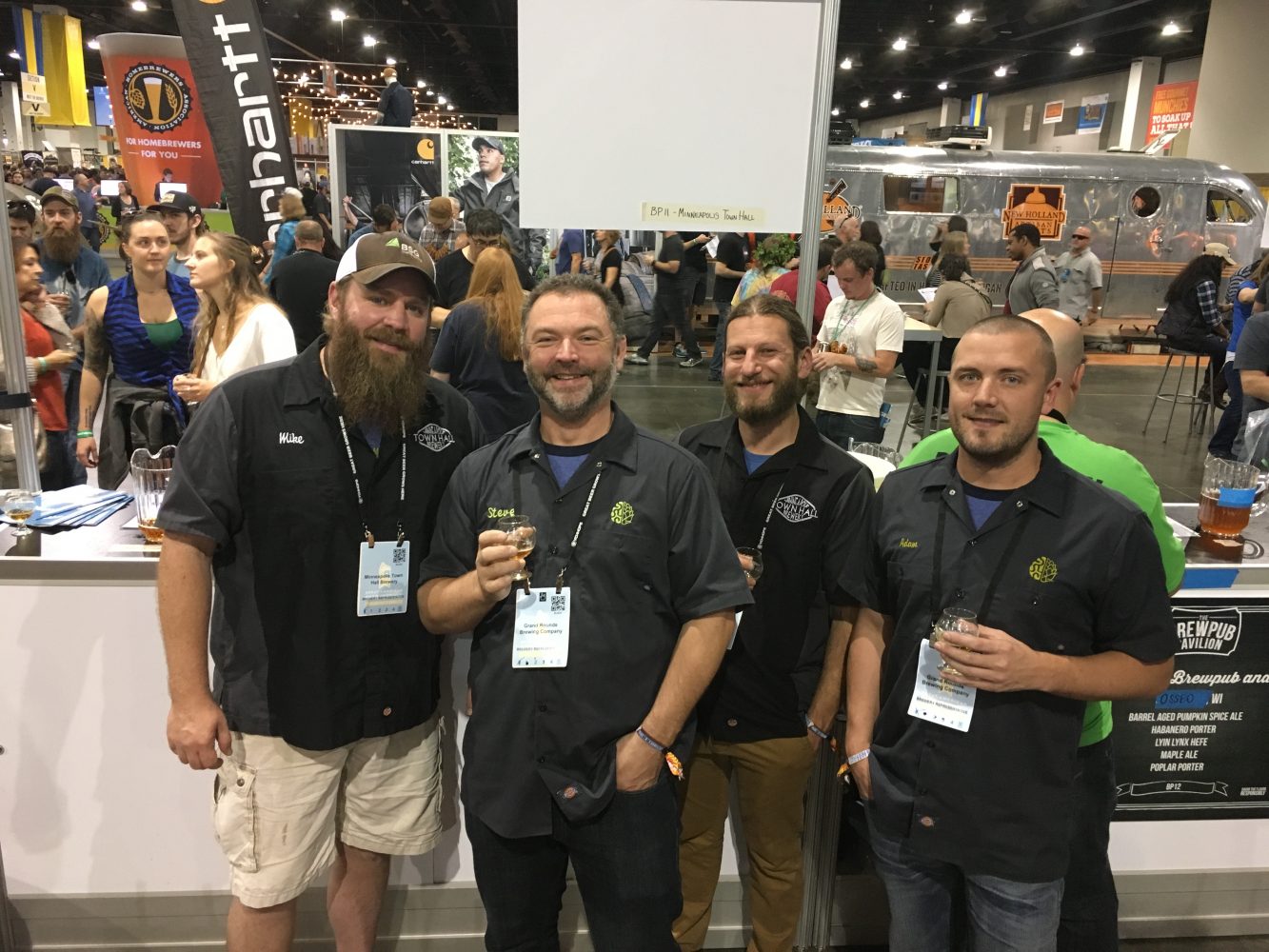