I’m nervous writing this article because although I love beer and trying new beers, I’ve never written about beer for public eyes. I babble about it occasionally on my own blog, but this is my first “formal” “review.” I’m nervous because when I describe beer to others, I say things like “this stout has that yeasty flavor I don’t like” or “this IPA definitely has that Americany taste to it.” I know there are better terms for these things. Yeast to a beer geek means the ingredient in the brew. “Yeasty” to me means a flavor like the bread riser. I should probably just say “bready.” I’ve heard beer smarties say that. They probably mean what I mean.

This is a longwinded way of letting you know that I am not a professional and that you should go easy on me. I don’t know what Andy was thinking when he thrust these two bottles at me and said, “Write about this beer!” You’ve been warned. 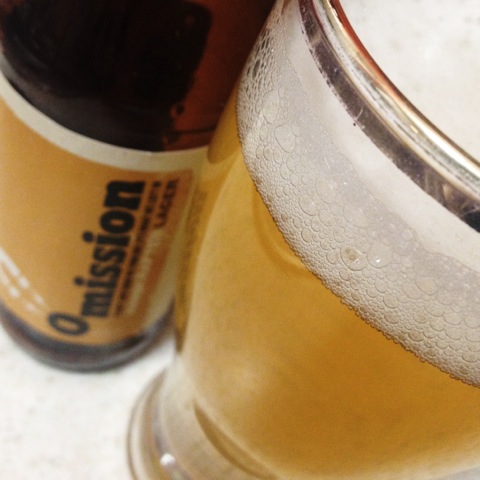 I cracked the lager first not only because I was engaging in the traditional light-to-dark progression, but also because I like pale ales better than I like lagers, so I figured I’d save my preferred for second.

I am civilized, so I poured the Omission Lager into a glass and it was, as you’d expect, yellow. The thin head fizzed up energetically and dissipated just as quickly. It left a clingy ring of remnant bubbles around the girth of the glass and a circle of suds on the surface.

I raised the glass to my nose and had a whiff. As an IPA gal, I was pleased to perceive some hoppiness which gave me hop—I mean hope—for the taste (I told you, lager’s not my style) (nor are good jokes). That was countered by the usual malty, lagery sweetness.

The usual malty, lagery sweetness was present in the taste, as well, but as with the bouquet—oh wait, beer folks refer to that as nose, right?—there was a balance from the other side, so it didn’t have that sort of heavy, thick mouthfeel that to me lagers tend to have. And that lively carbonation tickled my tongue. However, once I got to the aftertaste, it was just a little syrupy and coaty in my mouth.

I suppose I should give the Omission Lager some sort of grade to help guide you further, but because it’s a style of beer I don’t typically seek out, I shall refrain from judging it. But for a low (4.6%) ABV beer it was pretty big on flavor. 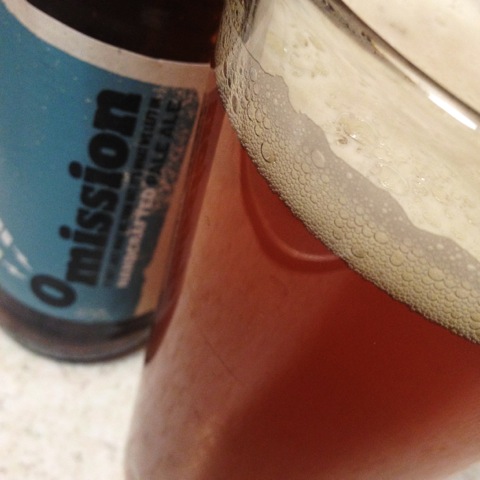 Pale ales are more in my wheelhouse so I was happy to try this one. Oh geez, now I’ve gone and raised expectations for this part of the article with my poorly-timed use of a cliché. Keep calm and drink on.

Not to worry, I poured the Omission Pal Ale into a different, clean glass. My glassware at home probably isn’t “beer clean” because I only use grocery store dish soap, but I do appreciate the glassware itself. I just read an article which posits the notion that the straight-sided shaker pint glass is actually the worst thing for beer. This is personally devastating because I get an unnatural kick out of drinking beer from a glass that is emblazoned with the same branding as the bottle (or tap) from which it was poured, and most of the ones I have are shakers. But I digress.

I poured the pale ale into a clean glass and was optimistic. The color was a solid amber (perhaps just slightly more so than you’d expect from a pale ale), and a pleasantly creamy, medium-frothy head rose up to the rim of the glass.

I accidentally dipped my nose in the foam, and I smelled medium, pale aley-hoppiness as well as a little bit of sweetness which I might call caramelly. Then I grabbed a napkin and blotted myself.

The beer tasted gently hoppy, as a pale ale should, with some maltiness that wasn’t too sweet or roasty but which did make me think “Americany.” That’s probably due to some particular hop which I can’t even come close to naming. Like the lager, the mouthfeel was pleasantly lively but not too much so. The aftertaste was just a bit bitter but also on the dry side and reasonably clean.

I told you I’d use fancy beer terms in this write-up. Oh, and these beers are gluten-free in all but name and labeling. You’d never know that when you drink them. Well done, Widmer.

Kelly likes beer (obviously!), loves to write, and is utterly hooked on Instagram. She tries to be good to the planet. You can find her blog at "Kelly’s Unnecessary Blog" and you can follow her on Twitter at @Kellydna.