This summer I went on a road trip to beautiful Victoria, Minnesota. I didn’t realize just how neat this little town was until I visited. I always knew where Victoria was but never made a point to visit. It was a speed bump, not a destination. It was on the way to places like Waconia and other western towns. I’d been to Floyds for bands before but never ventured far off Highway 5. This trip made me wish I had.

I showed up just as Brewers Supply Group was delivering, well, brewing supplies. I thought to myself, perfect timing, Derek. However, co-owner Dan Norton and brewer Jason Davis were more than happy to put the heavy lifting on hold to talk beer with me. I walked in through the brewhouse to the taproom where we sat down. Instantly I noticed the contrasting beauty of the shiny stainless steel with the nearly one hundred year old architecture. As we sat in the taproom, we discussed Jason’s brewing history, how the co-owners partnered up and what direction the brewery is heading. 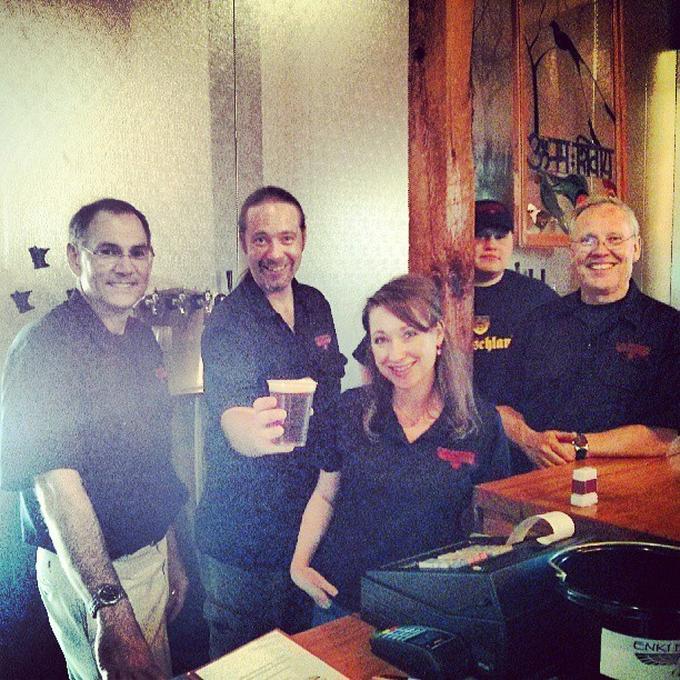 Owners Dan Norton and John Hayes met while working together thirty years ago. They met while working for shoe giant Nike and although their career paths have taken them in separate directions, they have remained friends with a mutual interest in good beer ever since. I’ve read that although Enki is an anagram for Nike, it has nothing to do with the name of the brewery. You see, Enki is the Sumerian god of running water. Most historians will tell you that beer was invented – or discovered rather – in ancient Sumeria. Also, Enki’s daughter Ninkasi was the goddess of beer.

Jason’s  brewing history goes back to the mid 90’s. He was waiting tables at the Sioux Falls Brewing Company, a small brewpub located in Sioux Falls, South Dakota. Before long he was in the brewhouse learning the craft of brewing. Eventually Jason took over the reigns as head brewer and was making some pretty good beers – he won 4 medals at the GABF during his tenure there. And I can vouch for his beers. Coincidentally, I was going to college in Sioux Falls at the time and remember quite fondly the Buffalo Stout, Ring Neck Red (South Dakota is the pheasant hunting capital of the world) and Phillips Ave Pale Ale. This was definitely one of my earliest memories of craft beer and it made a lasting and positive impression. Thank you, Jason! Sadly due to law changes in South Dakota as well as an obnoxious tenant in the same building the brew pub was forced to close. Shortly thereafter Jason packed up his family and moved to Minneapolis. He spent a few years working for Midwest Supplies in Saint Louis Park which is where he met John.

Originally, Jason started helping Dan and John in the planning stage as a consultant. Dan joked that a consultant is “someone who borrows your watch and then tells you what time it is”. It wasn’t long before Jason was invited to join the team on a full time basis. In early June they brewed their first beer, Citric Journey, and on June 22nd they opened the tap room. The only beer on tap opening day was Citric Journey and it was very well received.  Their goal was never to open with a huge variety of beers on tap but rather to brew one beer at a time and brew it well. Then introduce another one… and another…

If you were at Autumn Brew Review last weekend perhaps you met Enki’s Instigator of Camaraderie, Karie McDougall. She rounds out the team as the head of sales, marketing, special events as well as making sure your visit to the taproom is exciting and memorable. Industry folks, you’ll want to get to know Karie as she is your connection to delicious Enki beer! Karie is no newbie to the business. She’s spent the last six years working around craft beer. Initially with JJ Taylor’s craft beer distribution team and then with New Belgium Brewery promoting their brands. Look for her fun and charismatic personality at special events and when you visit the taproom.

The first beer I tried was their debut ale Citric Journey. A hoppy balanced Pale Ale booming with flavor. The name comes from the citrus notes the hops impart combined with malted barley coming from both North America and Europe. Even the beer itself takes you on a journey. There’s a subtle welcoming of malt on the nose followed by some pretty intense hop flavors. It finishes nicely with an array of complex malt sweetness. But not too sweet, there is a wave of bitterness tickling the tongue. Definitely worth a try. 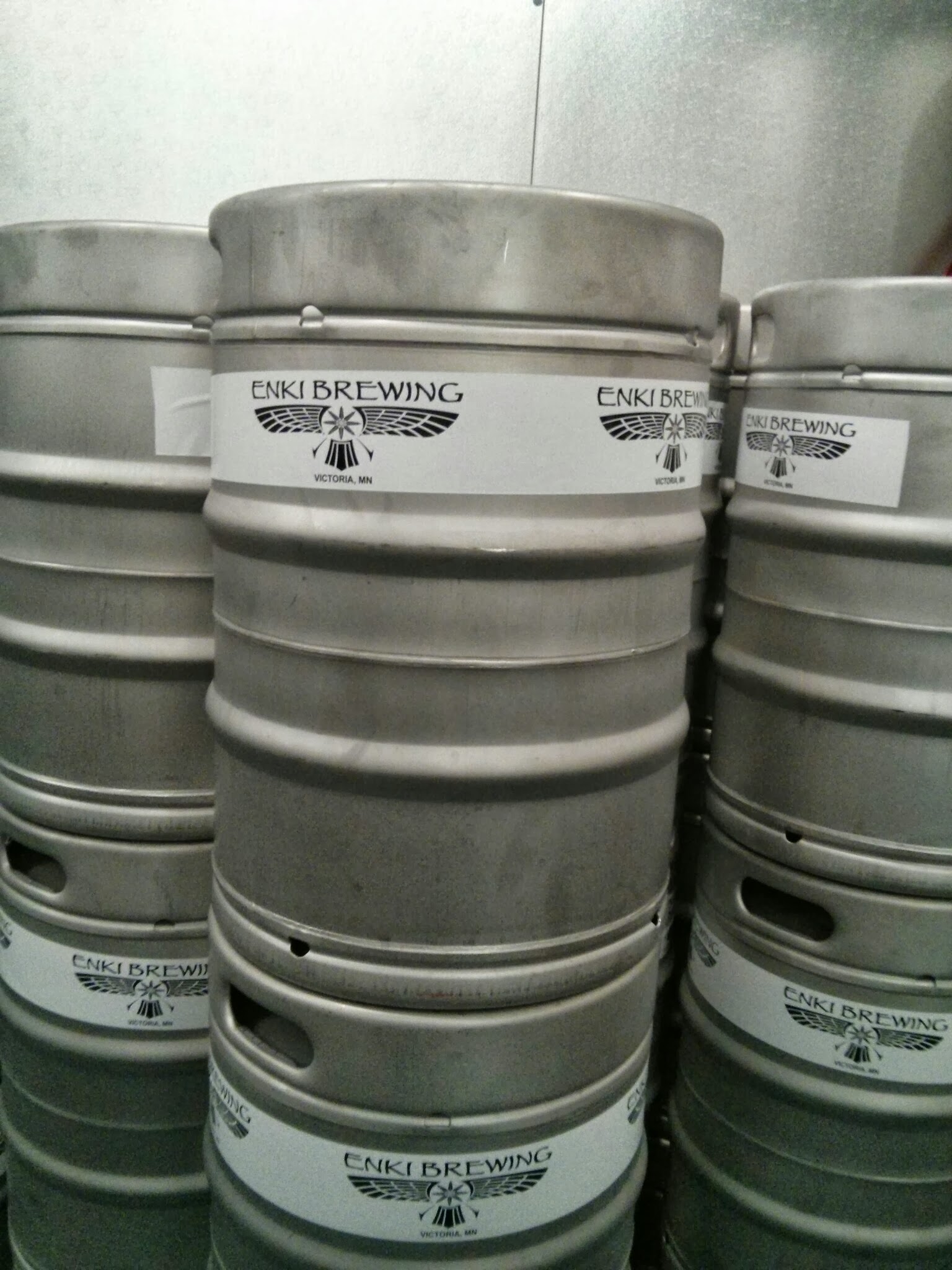 The second beer I tried was their sophomore offering, Auburn Kolsch. Auburn – Kolsch, that’s an oxymoron right? As Jason explains, this beer was brewed as a red ale but fermented and hopped like a Kolsch. My eyes definitely played tricks on my mouth. What I was expecting out of that glass was not what hit my tongue. It was delicately hopped with some floral notes and fruity esters. But there was also a soft malt presence. It was very good. As a stylistic thinker and trained beer judge this one confused me. But to hell with styles! Come on down and enjoy this one on the beautiful taproom patio surrounded by a table full of friends.

Speaking of friends, Enki’s mission is to “Make the World a Friendlier Place – Two Beers at a Time”. I really like this phrase. How many times have you heard “doing this” or “doing that” one beer at a time? It’s quite a familiar line. But this statement suggests companionship; having a beer with a friend, whether meeting up with an old friend or making a new friend. This philosophy resonates well with the brewery as it was founded by longtime friends who also made lots of new friends over beers leading up to this moment.

As I mentioned earlier the brewery and taproom were built within a one-hundred year old building, formerly the Victoria Creamery. The generations-old aesthetics were definitely kept intact while constructing the brewery. Located just feet from Steiger Lake and the Lake Minnetonka Regional Bike Trail this place is in an ideal location. Enki brews on a custom built 20-barrel brewhouse built by Metalcraft in Portland, Oregon. There are three fermentation tanks now with room for five more. The cooler, which sits directly behind the taproom, contains three 20-barrel brite tanks for finished beer. These are also used as serving vessels for the tap room. There is room for another three brites when needed. At the brewery you can get growlers to go or pints to stay. The taproom, with its beautiful exposed brick walls is open Thursday and Friday 4-10pm and Saturday noon-10pm. 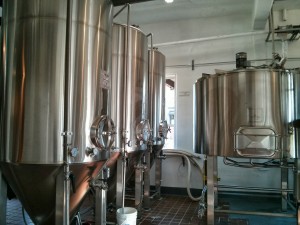 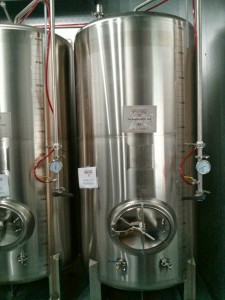 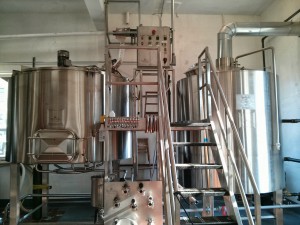 
Off to the side of the taproom there is a game room with oversized Jenga and other games. I imagine this will be the place to hang out when the weather turns cold.  But during the summer months, there is a comfortable, well shaded, outdoor patio complete with arbor and greenery. Get there early though, these tables fill up fast. The brewery also owns all the property curb-to-curb around the building and future plans may include some kind of beirgarten or festival grounds. That definitely piques my interest!

Currently beer is available on draft only at local bars mainly in Victoria and Waconia but there will be more to come. I am looking forward to their upcoming release of Chocolate Porter, available only in the tap room and special events. Perhaps we’ll see it at the Tonka Brew Fest next month!  Also coming up is a tap-takeover at The Gold Nugget in Minnetonka. The author personally recommends this watering hole. They have been dedicated to craft beer, and specifically Minnesota craft beer, since day one. Coming up later this month all taps will be represented by western suburbs breweries. Twenty taps in all from Enki, Lucid, Badger Hill, Excelsior and Bad Weather. I know I’ll be there.