A Look at Bell’s Inundated in Mankato 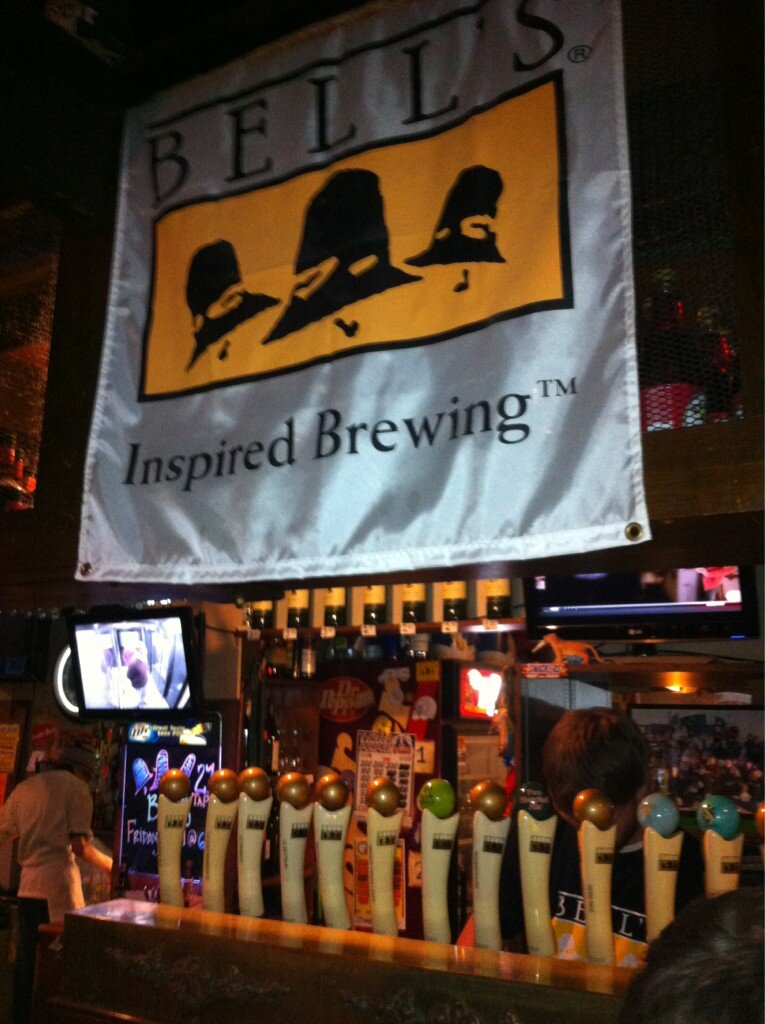 Bell’s flag and tap handles, proudly greeting us at the door!

On Friday, February 1st Patrick’s on Third in St. Peter, MN hosted a Bell’s Brewing Tap Takeover, featuring 21 taps. To say that this is the best way to kick off February is an understatement!

It’s encouraging to see more events like this popping up in our area, given that we are just a few miles outside Minnesota’s “beer mecca,” the Twin Cities.  When Ryan and I started the Mankato Beer Society we hoped it would be featuring events such as this, and we were stoked to try out some rare Bell’s beers. 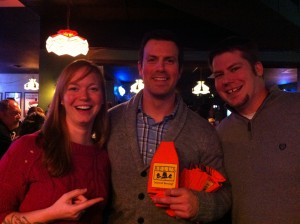 Jennifer, Jason (from Bell’s) and Ryan

When we arrived the restaurant was already buzzing with folks admiring the beautiful tap handles that spanned the entire bar. The lineup included commonly known beers such as Hopslam (yum!), Two Hearted and Best Brown but also treated us to some rare brews such as the Bourbon Barrel Aged Cherry Stout, Black Note Stout and Third Coast (which made its draft debut to the area).

The offerings were full pints or flights, and wanting to be a Jack of all Trades, I went for the Hoppy flight. It featured Sparkling Ale, Smitten, Debs’ Red Ale, Two Hearted, Roundhouse India Red Ale and of course Hopslam. Out of the six I tried, I have to say that Hopslam was my favorite. It was a little sweeter than I remember, but I enjoyed the hop forward nose and taste.  Ryan went for Dark flight that had Third Coast Old Ale, Oatmeal Stout, Rye Stout, Cherry Stout, Harry Magill’s Spiced Stout and Expedition Stout. 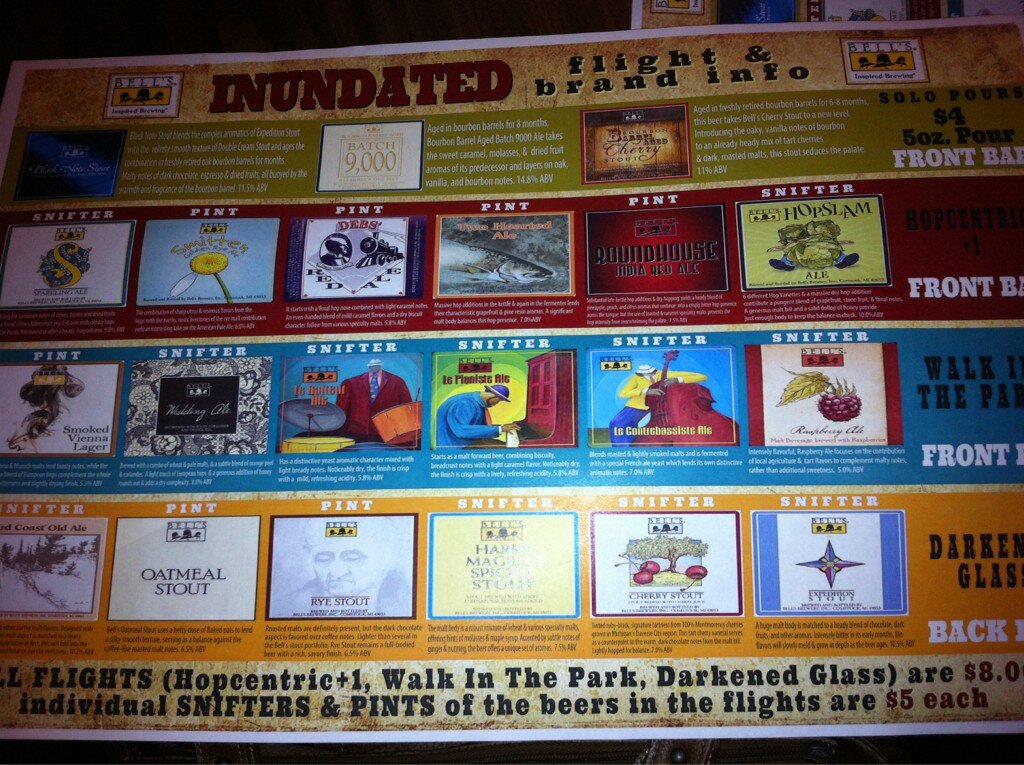 The flight and pint overview

After trying the flight beers we opted for snifters of Batch 9,000 and the Bourbon Barrel Aged Cherry Stout. The Batch 9,000 was definitely a crowd favorite at our table, and Ryan greatly enjoyed it. In terms of the Bourbon Barrel Aged Cherry Stout- I think I found a new favorite. I loved that it tasted mildly of tart cherries but was balanced out well by the bourbon and chocolate flavors. At 13.6% ABV I had only one, but will definitely be seeking it out again!

While we were sipping we got the opportunity to meet Jason from Bell’s.  He was busy handing out cool swag such as lip gloss, tasting note pads and bottle koozies but made time to talk some beer with us.  I got the impression that he felt the event was a great success, and that southern Minnesota definitely needs more craft beer options and events. We agree! 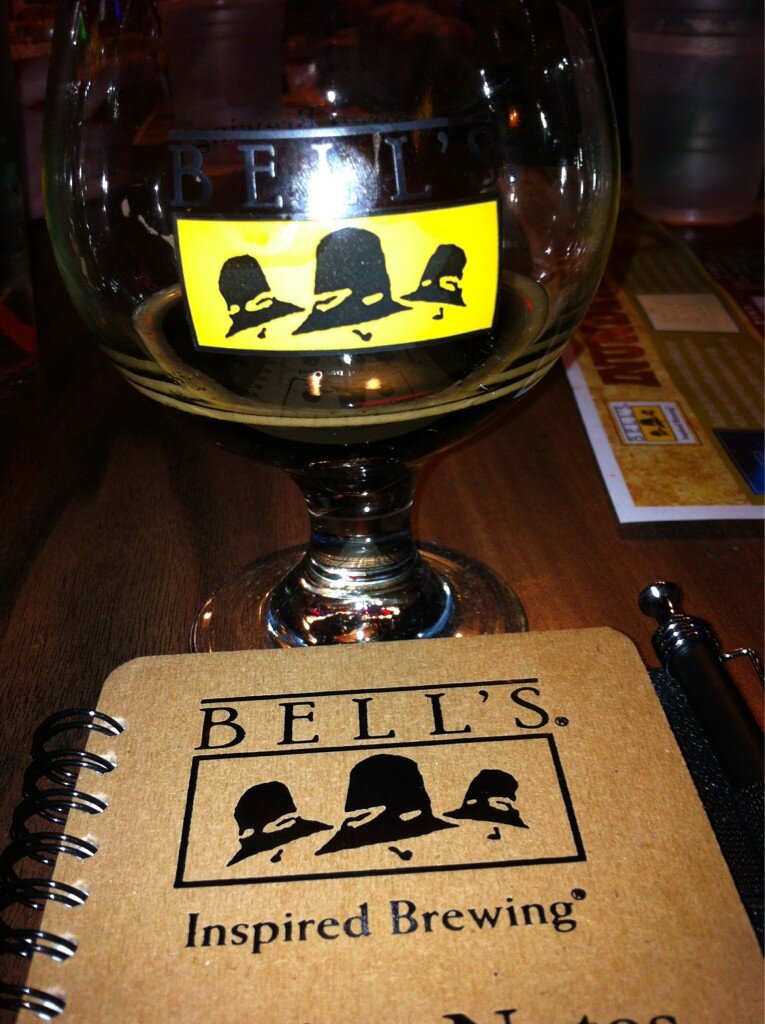 One of the several delicious beers we enjoyed in proper glassware.

As we headed out we wistfully looked back at all of those beautiful Bell’s Brewery tap handles, and made a wish for more craft beer events in our future. This set the bar high, and we know the crowd enjoyed the opportunity to have such a vast sampling opportunity. After the event we even headed to a local MGM Liquor Store and even checked out the Bell’s selection there. Cheers!

For those curious about the complete list, here it is:

Jennifer Johnson is the co-founder of the Mankato Beer Society along with her husband Ryan. On most of her weekends you can also find her giving brewery tours at Summit Brewing or drinking a tasty craft brew. You can contact her and the Society via email, and follow them on Facebook & Twitter @MktoBeerSociety.