On Minnesota Brewery Taprooms and Sundays 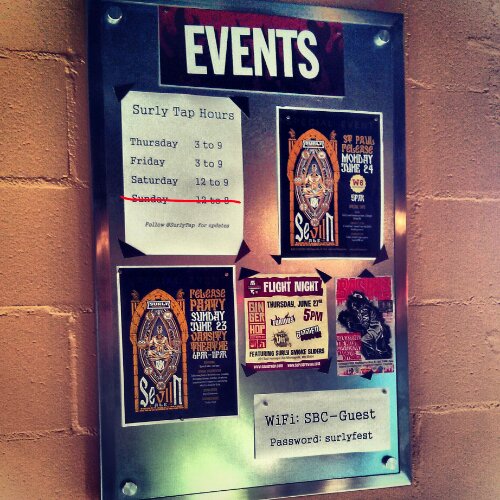 A while back Fulton Brewery wanted to open their taproom on Sundays for Minnesota Twins games. Their Sunday ambitions were short lived. Shut it down, they were told. Surly Brewing was given the same lesson earlier this week when they opened their new taproom. The sad reality is that Minnesota brewery taprooms aren’t allowed to open on Sundays.

According to City Pages, Surly must keep their taproom doors closed on Sundays, despite getting permission from Brooklyn Center.  The issue stems from a state requirement that mandates food sales on Sundays if a qualifying establishment (A restaurant, club, bowling center, or hotel with a seating capacity for at least 30 persons and which holds an on-sale intoxicating liquor license…) wants to serve alcohol.  Surly doesn’t sell their own food, nor are they a qualifying establishment.

This wasn’t the first time that laws requiring Sunday food sales have hurt local business owners. Bar owners in North Saint Paul also faced extra scrutiny a few years back when they were required to start serving prepared food after a being given a year meet compliance. I guess pizza and chips don’t soak up enough booze, only prepared food can do that…

Liquor and Licensing guidelines from League of Minnesota Cities puts it like this:

A city may issue a Sunday license only to those operating one of the following types of establishments:

It is worth pointing out that farm wineries in Minnesota can sell wine on Sundays, both on-sale and off-sale, with no mention of food, let alone prepared food.

MN Statute 340A.315 FARM WINERY LICENSE
Subdivision. 2.Sales.
A license authorizes the sale, on the farm winery premises, of table, sparkling, or fortified wines produced by that farm winery at on-sale or off-sale, in retail, or wholesale lots in total quantities not in excess of 50,000 gallons in a calendar year, glassware, wine literature and accessories, cheese and cheese spreads, other wine-related food items, and the dispensing of free samples of the wines offered for sale. Sales at on-sale and off-sale may be made on Sundays between 10:00 a.m. and 12:00 midnight.

Local taprooms often partner with food trucks to provide imbibers with a bit of sustenance. But, that is not really a restaurant. Surly brewing intends to have a full kitchen with locally sourced food to pair with their beer. So, their Sunday taprooms plans may just be a waiting game. As for the rest of the taprooms in town? The future is uncertain.

If Minnesota breweries want to open their taprooms on Sundays they need to be classified as a restaurant (…an establishment, other than a hotel, under the control of a single proprietor or manager, where meals are regularly prepared on the premises and served at tables to the general public…), get the law changed, or seek some sort allowance for food trucks.

Maybe someday we can hang out in a taprooms on a Sunday and listen to a live acoustic set, or turn on the big screen and enjoy some football, but probably not anytime soon.  Does anybody know of any local wineries that have big screen TV’s?

3 thoughts on “On Minnesota Brewery Taprooms and Sundays”