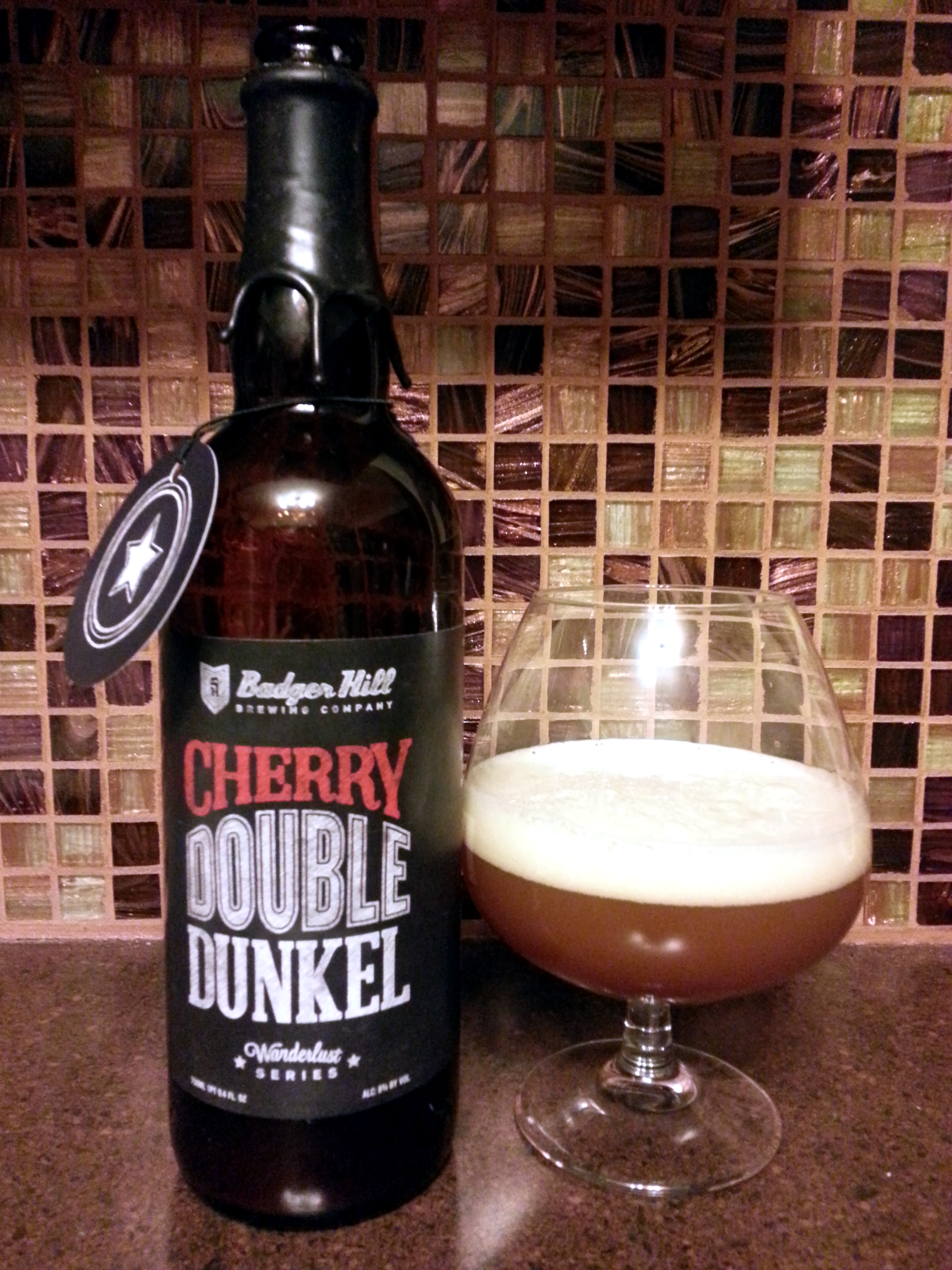 Wandering with a Minnesota Brewery

wan·der·lust: a strong desire to travel; an impulse to wander

I’m a beer lover that lives in the Twin Cities and I’m a husband and a father to a 4 month old. Wanderlust is not in my vocabulary. Hell, it’s not in most people’s vocabulary. One Saturday night I found myself at the local liquor store with the vicarious notion that I was 25 again and looking for something tall, blonde, and sweet. Well, I found it in a lonely 750 ml bottle of Badger Hill Brewing Company’s Cherry Double Dunkel sitting in the cooler and decided that would be perfect.

Badger Hill’s Cherry Double Dunkel is #2 in their Wanderlust series of limited, small batch brews. If

you’re into the whole style thing, you might categorize the base beer as a Weizenbock. The Beer Judge Certification Program (bjcp.org) lists a Weizenbock as style 15c and describes it as “A dunkel-weizen beer brewed to bock or doppelbock strength”. Now, let’s forget style categories. After all, this is Wanderlust.

Appearance: I thought about the right glass to pour this beer into and a pilsner or hefe glass was the obvious choice, but instead I grabbed my favorite $1 Ikea snifter. (We don’t get too fancy at my house). It poured a murky, orange color with a nice finger of off-white head. There is something mesmerizing about watching an unfiltered beer swirling around in your glass.

Nose / Smell: I immediately picked up banana and a very slight smokiness. A bit of honey and vanilla were hidden in there, as well. After a few sips, I started to smell the tartness from the cherries.

Flavor: This beer starts out bright and crisp, followed by a pleasant, natural tart fruit-flavor. The cherries kick in with a sour note towards the end along with the ever-present wheat flavor.

Mouthfeel: The Cherry Double Dunkel has an interesting mix of feeling creamy and, at the same time, refreshing. It’s 8% ABV produces a warm, but not overwhelming alcohol feel.

Questions for the Brewer

After tasting this beer, I had the opportunity to ask Brock Krekelberg, Co-Founder of Badger Hill, a few questions:

Tell us a little bit about the beer and the brewing process.

“The beer started out as a request from our partner Brent to create a beer that utilized Cherries from his wife’s family orchard in Door County, WI. We experimented over the years with a number of recipes, some better than others. We have a love of German wheat beers, and thought to take one of our favorite dunkel recipes, upped to weizenbock levels, as a base. We loved the result. The fruity, spice and caramel tones of the weizenbock are a perfect complement to the tartness that comes from the cherries. Each component adds/changes the character of the other in a great way. It’s unfiltered and unfined, so it pours a very opaque. It tricks you into thinking you will be tasting a thick, caramel sweet beer, but it is actually quite crisp and tart.”

How do you feel about the outcome?

“We are very happy with the outcome! We wanted to bring something out to craft beer lovers that is new, something they have never tried before. We were looking to create a special brew that tastes fantastic, and we hope people agree. It’s different from the type of beers we have come out with so far, and that is something we also wanted.”

What would you say about local beer to someone out-of-state who plans to visit MN?

“Minnesota craft breweries are creating fantastic and ever greater craft beers. It is truly a destination state for craft brews. Almost every style fan be found, and some that you have never heard of. The craft brewers here in Minnesota are extremely passionate about what they are doing, and it shows. Long standing breweries like Schell and Summit continue to make outstanding beers and are launching amazing new ones. And new breweries are crafting wonderful styles as well as pushing innovation. It is a great time to be a beer fan in Minnesota.”

What is next in the Wanderlust series?

Cherry Double Dunkel is a dynamic, refreshing beer that I could drink all year round. This is a beer that I would be proud to bring to a party and enjoy with friends and family. In fact, I brought a bottle with me to Iowa for Thanksgiving at my mother- in-law’s house and it was a hit! I’m so glad to hear that they have plans to release this beer annually.