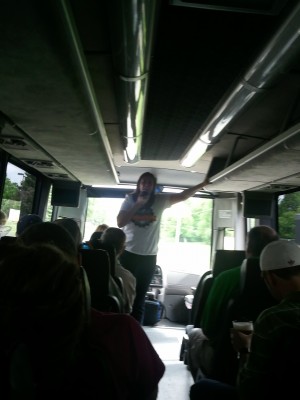 Being an ultimate nerd, I’m quite used to blathering on about some uber-geeky subject with great excitement while non-nerds around me completely zone out.  One of the reasons that I love brewing so much is that it gives me a topic that I can be super nerdy about without boring anyone to death. 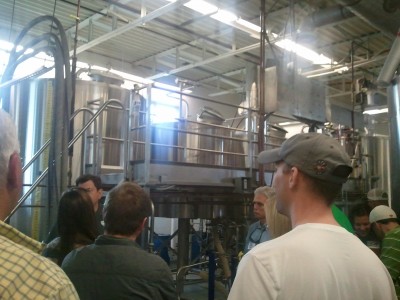 The brewery tour that I went on this weekend with Taste Twin Cities was the perfect chance to geek out (they also have food and wine tours!). The tour began with everyone congregating in downtown Minneapolis and hopping on a bus.  I was with a large group of family and friends celebrating my uncle’s retirement, which made the experience all the better.  We were allowed to eat and drink (road growlers!) on the bus, and our tour guide, Betsy, did an excellent job of giving us the background of each brewery and keeping us entertained in transit (singing German drinking songs). 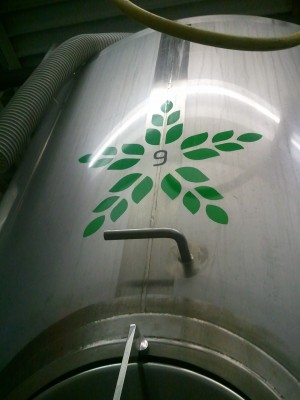 Our first stop was Fulton Brewey.  Fulton is one of my favorite breweries to visit in Minneapolis.  It is also one of my favorite to see people introduced to.  People seem to rave about the awesome location (pints before a Twins game) and the great tap room.  We got an extensive tour of Fulton’s brewhouse from the father of one of Fulton’s founders, and a great explanation of the brewing process.  We got a walkthrough of making an imaginary batch of Lonely Blonde.  It was great to see people who are unfamiliar with the brewing process become engrossed while learning about alpha acids, amylase, the history of India Pale Ale, and St. Arnold the patron saint of beer. 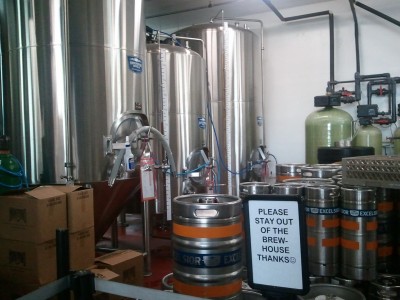 Excelsior – Please stay out of the Brewhouse, thanks! 🙂

My absolute favorite part of the Fulton tour was the an excellent endorsement for drinking local beer, including details about how spent grain supports a local farmer’s blank angus cattle.  Another highlight was the story of how Fulton came to be, which is bound to be inspirational to any bleary-eyed  home brewer with secret dreams of starting their own brewery.  All in all, Fulton was an excellent beginning to this tour especially for those who are unfamiliar with MN beer. 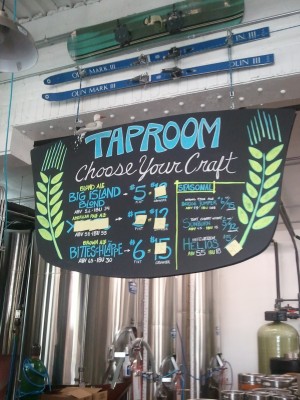 The next stop of the tour was Excelsior.  While we were there for a short time, it was certainly an enjoyable time.  One thing that I found to be really great, was that for many of the people on this tour, these were there first brewery tour experiences.  For this reason, I was really glad that we got to see Excelsior immediately after Fulton.  I believe the contrast between the two really showed that each MN brewery has a completely unique identity that can be seen not only in the beer but also in the facilities and the people.  This is one thing that I believe really sets craft beer (especially MN craft beer) apart from macro brews.  Big beer is faceless and without individual character. When I drink a MN craft beer I like to think about the personalities that helped hand craft it, and the places that it was made. 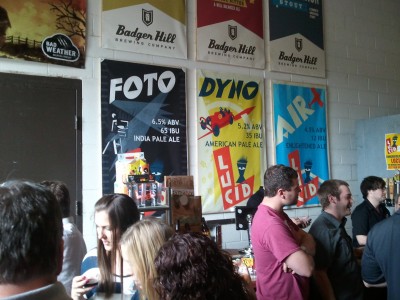 While a little off topic, my rant above leads me to what I loved about the Excelsior brewery.  While significantly smaller than the Fulton facility, Excelsior is impressive in the way it utilizes its space it both a production sense as well as to serve customers.  We had a short and sweet tour of the brewhouse from a laid back, yet enthusiastic, Excelsior employee.  Overall, Excelsior has an atmosphere that reeks (in a good way) of the imagination and spirit of Excelsior team.  You can taste the passion and smell the fun and whimsy.  It is ALWAYS a sensational experience to drink fresh beer in the room that it was crafted. 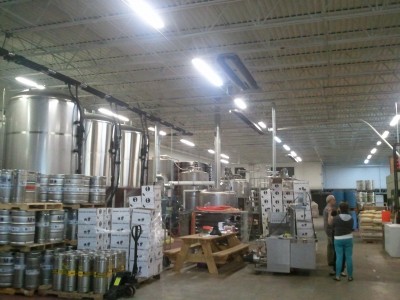 The last stop, in my opinion, was a genius way to end a tour of Twin Cities breweries.  We ended at the facility that houses Lucid, Badger Hill, and Bad Weather breweries.  If there is any story that paints a real picture of the solidarity and collaboration that exists amongst MN brewers, it is the existence of this warehouse-turned-brewhouse that these three groups share.

I imagine a utopia where crafters of fine beer share ideas and techniques for the good of all beer drinkers of the world.  I’m sure reality is much different than that, but just the fact that these people can get together and agree to share the same space to make such unique and different beers in the same space is just fantastic.  I was seriously impressed by the setup and capacity of this facility, and the serious room for expansion.  These three groups are ones to seriously watch while the grown and mature! 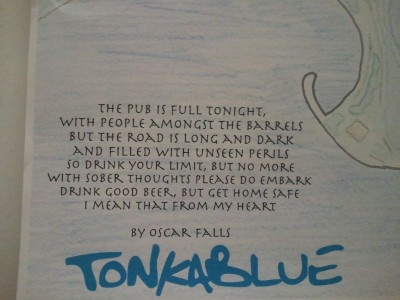 This is in the bathroom at Excelsior. Cheers!

In conclusion, this was one of the best beer-centric days that I have had in a while.  I got to visit three awesome breweries with people that I enjoy spending time with and sharing good beer with.  I got to get to know a little more about the great people behind the beer.  And on a more personal note, I got to celebrate the retirement of my uncle and meet one of my own personal  beer heroes Ray Klimovitz (former Technical Director of the MBAA).  What a great day!

Please, leave some comments.  I’d like to hear your tour experiences and feed back on my first big post!

My name is Zach and I love beer. The artfully crafted beverage that’s deep with history, full of complex flavors and aromas, and responsible for an international movement. I can be found on twitter at @TheNerdBrews