Despite having been in existence for nearly half a decade now (at least in MN), taprooms (and now tasting rooms for distilleries) are still new to a lot of people. We’ve seen a lot of variations on the taproom idea even within Minnesota so far. Surly –now  finally capitalizing on their own lobbying — has their megaplex, Harriet has their local destination music venue, and Lakes and Legends has their indoor/outdoor fusion. In fact, it seems unreal at this point that any new brewery would not include some sort of taproom into its business plan.

But what is a Taproom? Not in its definition; I think that part is clear. The question lies more in the social and cultural implications of the current state of the beer industry. Taprooms are not bars, they are not restaurants, they are not music venues. They are something entirely their own. I manage the taproom at Lake Monster Brewing Co in St. Paul and it never ceases to amaze me the differences between a taproom and every other form of bar found throughout the industry.

I should note that taprooms are inherently different than brewpubs. Taprooms are only allowed to sell what is made on site. The same goes for tasting rooms at distilleries. The strangest thing that I think I’ve found about taprooms is that despite only selling beer, there are plenty of people who “don’t drink beer” showing up throughout the week simply because it’s there. The drive to support small, local business supersedes their preferences on drinks. That would be like someone living in an apartment buying a snowblower from your local general store even though you didn’t need it simply out of solidarity against big business.

Tap rooms are also different than any other bar. There is an inherent understanding that taprooms are more family-friendly. Most taprooms have games, but many have games or toys aimed for children’s amusement while the parents have a few pints. Normally, a bar that didn’t serve food would be the last place you would find anyone under 21, but taprooms seem to have flown in the face of that stigma as well. To be frank, taprooms are not bars. For the most part, the alcohol consumption is not the goal, but more of the medium with which we are able to share our time with others. 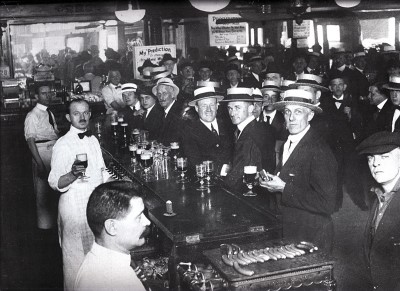 It all ties in with the anthropology of the bar as it relates to our country and culture. The bar has traditionally served as the most common meeting place. It was not a venue for drunken debauchery, but a forum for business, politics, socializing, and networking. The idea of the taproom seems to have finally overcome the stigma that has been put on the bar since the campaign for prohibition. I think the idea of “craft” not as just a buzz word in the phrase “craft beer,” but as the idea of our newly-found focus of artisan products has a lot to do with that.

I know personally that beer has helped me to appreciate the finer subtleties within food, wine, cocktails, and other aspects of life like music and art. That open-minded culture is almost directly defined by the people who drink craft beer. I think that ideal is what has finally swayed parents to bring their children into such an environment. One parent, who works in the beer industry, said that he would rather have his kids grow up with a knowledge, not a fear of alcohol. He would rather be the one to teach them than to prohibit booze and have them find out in high school or college in dangerous situations.

No other bars would promote the use of their spaces for yoga, craft fairs, or customers coming together to pick hops for the beer that they serve. Taprooms are unoficially the new neighborhood bar. Not FOR the people, but OF the people. As I’m just returning from a trip to Italy, I see many similarities between the ancient Roman Forum (a communal space for socializing, commerce, and politics) and the modern day place we call the “Taproom.”