Consumers and store owners took to the Capitol today to fight for Sunday liquor sales. Supporters were lined up by the dozen, decked out with T-shirts and signs. The opposition and their lobbyists showed up in suits and ties.

Edward Reynoso, political director of the Teamsters Joint Council 32 and a representative of South Lyndale Liquor spoke in opposition. “Our customers have never asked us for Sunday sales,” Lobbyist Maryann Campo stated. “Our members have made it very clear, they do not want to work on Sunday,’ said Reynoso.

Four Firkins store owner Jason Alvey testified in support of the bill. Alvey expressed his frustration as a business owner, stating that he is unable to meet the needs of his customers and is forced to pay rent on Sundays without be able to generate revenue. 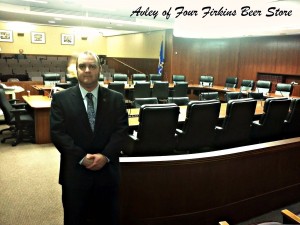 Senator Paul Gazelka (R-Nisswa) expressed one of the few concerns from the committee. Senator Gazelka expressed concerns about small stores in the middle of the state having to open on Sundays.  Reinert replied, “There is no have to.”

Reinert told MinnPost that if consumers want the longstanding law to change, they have to do something to combat the powerful interests pushing for the status quo.

“Everybody always asks me, ‘Who’s asking for this?’ People. Remember those folks out there that we’re supposed to represent that shouldn’t have to have a lobbyist and an organization to make something happen? That’s who’s in favor of it.”

The bill was not held over for inclusion into the liquor omnibus bill. The proposed measure will have to stand on its own, making its way through the Senate and the House. It still stands a chance if enough consumers call their representatives.