Summit Brewing has been releasing some unique beers in celebration of their 30th Anniversary. They started with a Double IPA and followed that up with Keller Pils. Now, introducing the 30th Anniversary West London-Style Ale. 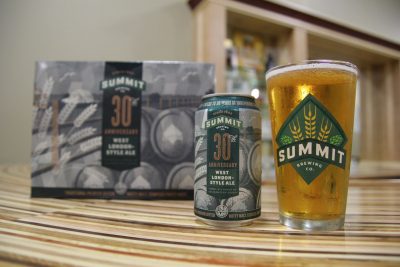 West London-Style Ale is a British-Style Best Bitter concocted by Summit Brewing Head Brewer, Damian McConn. McConn used English classic Marris Otter malt combined with traditional and modern hop varieties to produce a medium-bodied toasty English Ale that weighs in at 4.6 ABV. This is a delicious summer patio beer that you don’t want to pass up.

Summit’s release party will be at Brit’s Pub in downtown Minneapolis on Sunday, Aug 7 from 10am – 4pm. The inaugural keg will be tapped along with live music by Freddie Manton & The Southsiders and Hard Day’s Night Beatles Tribute Band. West London-Stye Ale will be available on tap at your local pub and in cans at retail stores the second week of August.

Summit continues their 30th Anniversary celebration with their annual Backyard Bash. Summit Backyard Bash is happening Saturday, September 10 from Noon-8pm in the back of the brewery at 910 Montreal Circle in St Paul. Tickets are available for $30 in advance and $40 the day of the event.