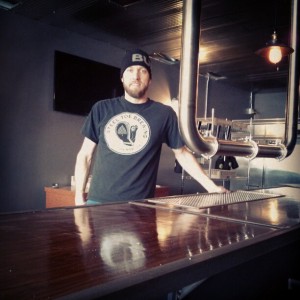 Steel Toe Brewer Jason Schoneman is done (pretty much) putting his taproom together. A man that truly does it all, Jason had a vision of what he wanted his taproom to be and created it with his own two hands.

The new taproom spans the length of the brewery’s front room. The walls are slate gray. The bar and counters are stained hardwood trimmed with dark steel. The taps hang from the ceiling and and there is a plasma tv behind the bar.

The taproom will be open at 3pm on Saturday. Stop in and them break it in proper. Just be sure to get there early, it will definitely be crowded.