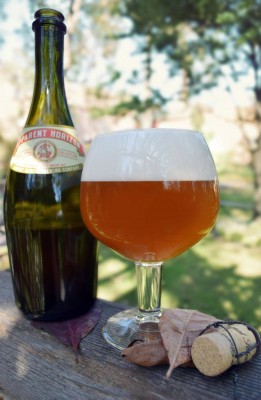 a half old that does not want to deviate from its German heritage, but looks to stay relevant in a market saturated with craft breweries creating new styles every day? August Schell Brewing Company’s answer is to innovate one of the lesser-known beer styles with historic German roots, the Berliner Weisse, and they do a fantastic job with it.

With the Noble Star Series, Schell’s has brought a rare style to the forefront with grand slam successes such as Black Forest Cherry, Star of the North, and the first runner up in the Heavy Table taste off (beat out only by another Schell’s beer), the Starkeller Peach.

With the latest Noble Star release, Jace Marti, master brewer and sixth generation member of the August Schell family, brings rye to the mix in an interesting malt versus sour battle for your taste buds.

“With Apparent Horizon, we wanted to put a twist on the fruity acidity normally found in a Berliner Weisse. The Substantial addition of rye to the base of the beer creates a spicy dryness and an interesting aroma of sourdough, rye, and pumpernickel.” – Jace Marti

The beer is a very-hazy, amber gold ale with high carbonation and a light, effervescent head that quickly dissipates. The aroma is surprisingly subtle with hints of over-ripened lemon and lime peel. There is a slightly sour and tart aroma with just a faint suggestion of a dusty, woodsy cellar flavor.

The flavor throws you a bright lemon and lemon peel tartness faster than you can see coming. This tart and sour flavor subsides almost as quickly as it came and leaves room for some sweeter, malty flavors. There is a good, lightly toasted bread flavor with a faint flavor of baking spices. The brew rounds the experience out with an off-dry, yogurt-like lactic finish and has lingering flavors of honey and graham cracker. Soft chamomile and floral notes compliment the lactic finish beautifully.

Overall, this is a very approachable sour with a great subtle complexity enough for even the most experienced of palates.