By Dan Belfry and Jon Buck 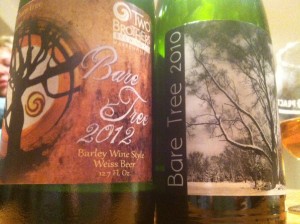 We decided to celebrate the arrival of spring with a barelywine that has a little spring in its’ step. This beer is clocking in at around 11% ABV and we were excited to try it! Two Brothers makes some great beer and this smaller (12.7oz) corked and caged offering should be no exception. We’ve got another ’10 and ’12; I swear we have other vintages, so look for them next month!

Appearance (’12): There is almost no head, a half a finger at most, which quickly dissipates into a thin white foam floating around the glass. It pours a golden hue with some red undertones, the clarity is high aside from a healthy amount of Sea Monkeys floating around. It should be mentioned that we had a guest taster this week who didn’t think very highly of the Sea Monkeys, we told her that beer was a sort of dude yogurt, with those active cultures and what not. It’s science.

Appearance (’10): Holy Bubbling Barleywine Batman! This guy’s got some carb to it, and it’s not going anywhere. A thick foamy head forms upon pouring and the foamy pudding lingers and loses little body as we review. The clarity on this one isn’t as high, has a slight haze and larger Sea Monkeys floating around. The color is almost the same as its’ younger sibling. 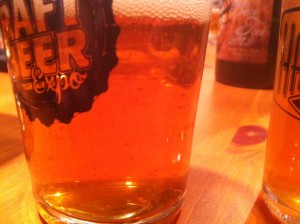 Aroma (’12): Smokey and meaty are forefront here, which caught us a little by surprise. It was described aptly as beef jerky by our guest taster, and there is also a floral bouquet with a sharp tang to it. We are attributing these to both the wheat and yeast in this brew. A slight alcohol presence bites at the end, but nothing overpowering.

Aroma (’10): It appears that carbonation isn’t going to be the only drastic difference between these two. The nose here is dominated by fruit and flowers, dry and sweet like a cider or champagne. Green apple tartness stands out as the nose evolves when the beer warmed up. It smells great and we can hardly wait to try this guy.

Taste/Mouthfeel (’12): Not a ton of complexity to this tasting. It starts off with strong wheat presence, with a floral tang and some sharp crispness and earthy undertones. It then moves to some sweet notes with a hints of honey and caramel, which gives no hint of an 11% beer, as the alcohol is all but undetectable here. Finishes somewhat dry with some lingering fruit notes. The lack of carbonation lets the sweet and fruit linger which personally I found to be the best part, so I’m okay with that. Barleywine style Weiss beer/Wheatwine isn’t something we’re very versed in, so not sure what the level of carbonation is supposed to be, but this seems a little low.

Taste/Mouthfeel (’10): This one, while also leaning toward simplicity, leads us down an entirely different path. It starts with an assertive sweetness, which is eased out by a green apple tartness, and leads nicely to a path of dry sweetness. While this is reminiscent of a green apple tart dryness, this is decidedly sweeter, and honey marches us to the end of this flavor profile. The amount of carbonation evident in the lingering head isn’t very present in the body. The bubbles were quite fine in the head and had little effect on the tongue and was almost like a cask beer in terms of carbonation. By contrast this was nice, as it let the flavors again linger and move slowly away.

Overall Comparison (’12 and ‘10): These beers landed quite a distance from one another on the flavor spectrum and in terms of carbonation. Oddly, the more recent vintage was the less carbonated of the two. We’re not sure if the vast differences are explained by an off batch from either year, or if this really highlights the amount of change that can happen for this beer over the course of two years. One thing we can say with certainty is that we’ll continue aging this; if the ’10 vintage is any indication, this one is a prime candidate for aging. The ’10 really blossomed in two years, as fruits and honey were abundant and delicious. Both were highly drinkable, don’t get me wrong, but the ’10 was such a gem I would recommend that you hang on to whatever year you have of these. Both are around 11% and I couldn’t have told you they were much above 6%. Kudos to Two Brothers on this one.