Beer of the past – Yoerg’s Brewery 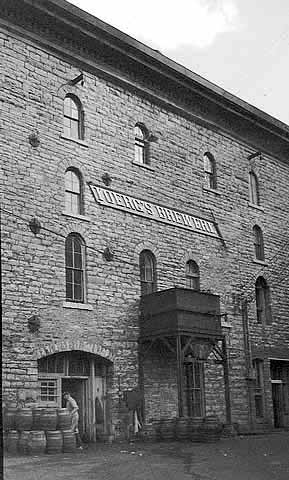 In the last couple years Minnesota has had a beer brewing explosion and in some ways a rebirth. Most Minnesota natives only know of the bigger breweries of the past Hamm’s, Schmidt and Schell’s. Of those three only one still is brewed in Minnesota and the others have been bought up and moved out of state. There were also many other smaller breweries throughout the Twin Cities and the state of the early 1800’s and 1900’s that have also closed their doors for good and faded away into history. I’d like to give light to the ones that came before us and paved the way for the modern beer age which is upon us now.

In this edition I’ll start with Minnesota’s first commercial brewer; and that man was Anthony Yoerg. Born in 1816, Yoerg was born in real beer country, Bavaria Germany. He was trained as a brewer in Bavaria and moved to the United States when he was 29. He jumped around the country a little before landing in St Paul in 1848.

By the following year, Yoerg was already up and brewing in the area behind the Eagle Street Grille where he could use the bluffs to store his beer in which it was famously referred to as “Cave-Aged”. By the time 1871 came around his beer was in such demand that the brewery was getting too cramped and he needed to relocate. Finding a new location was a simple as looking across the river. 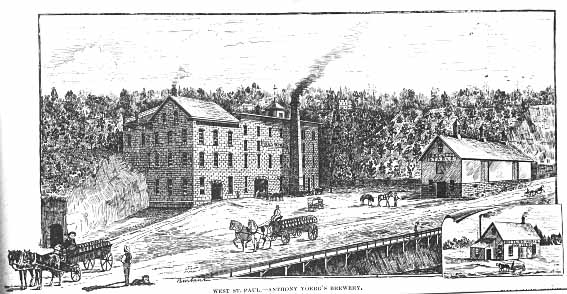 The new brewery was built on the corner of St. Paul’s Ohio and Ethel streets. Here Yoerg had the perfect 47 degree climate for the storage and aging of the beer and more than enough room if needed for any future expansion of the brewery. Soon his new brewery was producing up to 50 barrels of beer a day and things were looking up for Yoerg and his crew.

By 1880 the brewery had entered “the modern age” and installed steam power. The work crew consisted of around 20 workers including the brewmaster Joseph Slappi… I could make a joke here but I won’t. In the next decade the styles were expanded by offering Pilsner (of course), Lager and Culmbacher, (not exactly sure what style that is but Kulmbacher is currently a beer in Germany which is made in…Kulmbach). On a side note Yoerg had a slogan for their Royal Export beer and that was “The Queen of beers”…yeah I’m not sure what was going on in those caves but those guys spent wayyy too much time together haha. Also, is this where Budweiser got the inspiration for their slogan? 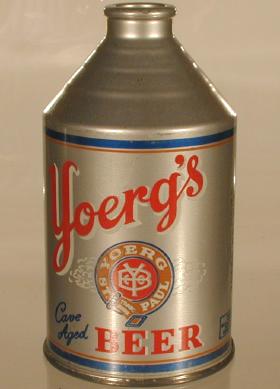 Sadly, in July of 1896 Anthony Yoerg died. After which Yoerg’s five sons took over the business and continued on. Brewery operations continued until what we all know as the biggest and worst idea ever, in 1922 Prohibition changed everything. The brewery was now forced to change what they had down pat and start in a different direction if they expected to survive. Other breweries decided to go the soda route but Yoerg decided to go the dairy route.

The Yoerg Milk Company was born, and yes it was as bad as it sounds. According to records the Yoerg’s were unable to have any competition against the already established dairy companies in the metro area. Amazingly enough they struggled through prohibition and in 1933 the Yoerg beer company was back.

After prohibition ended it seemed like the Yoerg brewery missed the starting gun and soon Hamm’s and Schmidt were leaving them in the dust. They continued their brewing style and also continued to use the caves in place of the refrigeration style of what others were using in which also inhibited them from any long distance shipping, too.

The times were changing, but the Yoerg’s weren’t. They finally came to admit defeat after financial loses continued and there were no options for expanding to what was the modern day advances in the industry and in 1952 the Yoerg brewery closed it’s doors for the last time. To this day the Yoerg name is still forever associated with St Paul’s beer roots.