Bad Weather Brewing Company Co-founders Joe Giambruno and Zac Carpenter began their brewing company at Lucid Brewing in Minnetonka, MN. Well, sort of. Like Badger Hill Brewing, Bad Weather Brewing has used the unique model of an alternating proprietorship to enter the Minnesota beer market with fewer risks and smaller initial investment.The decision to operate an “Alt Prop” start up appears to be paying off. Badger Hill announced their new Shakopee Brewery earlier this year, now it is time for Bad Weather to have a turn at making a big announcement. We pinned down Bad Weather Brewing Co-founder Joe Giambruno and made him answer answer all our burning questions.

Who is the architect?
We met with quite a few different architects and it was a tough choice, ultimately we chose HCM as our architect. They did a fantastic job with a few local breweries including Dangerous Man and we really clicked with them when it came to the vision of the new brewery.

What kind of planning went into picking Saint Paul?
Well it has been a long road just to get to the point of telling you that we want to build our brewery in St. Paul. Marit Brock who is running for City Council has been extremely helpful to us even before we knew this St. Paul site was for sure. She and the neighborhood group have been excited and supportive. Council member Dave Thune has also been very encouraging to us. It’s very helpful when people want fun business in their area!

Obviously there are a ton of people behind the scenes who have gotten us to this point. If I publicly thank my wife for working a real job so I can make beer, she may give me a back massage later.

Tell us about the Beer Membership.
We are offering two great ways for people to help us get this thing off the ground. If you join our beer membership you will get the first two pints FREE every time you visit the taproom, for LIFE!

All info for this can be found at http://badweatherbrewery.com/beer-club.html 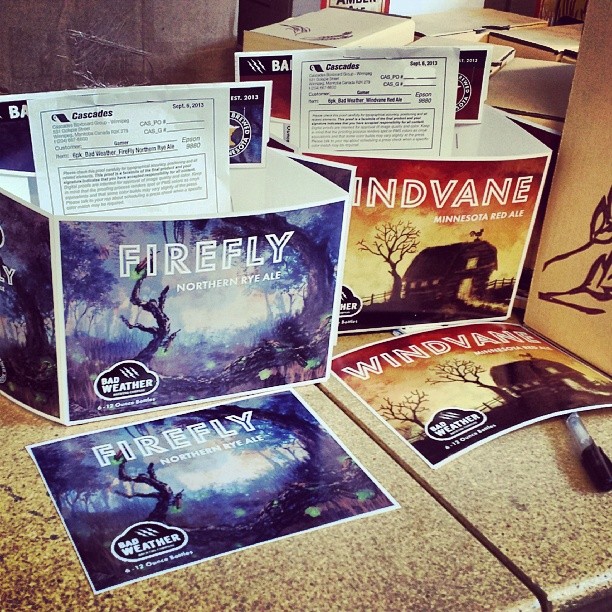 How do you choose where to start a brewery?
Well we always knew we wanted to be a little closer to the cities for this next expansion. We also really wanted to find a supportive community and we definitely think we found that with this site. The neighbors are very active and passionate about their neighborhood and we should have great support from them. And being blocks away from the Xcel.. I mean come on, can’t beat that! (I may have to steal from the tip jar to buy wild tickets)

Just like shopping for a home after you go through all the statistics of certain areas and sites yada yada, besides all that the place had to feel right. This sometimes takes a lot of imagination, particularly with some of the places we have seen. Fortunately, I spend most of my waking day daydreaming so a good imagination wasn’t hard to come by.

Why not NE Mpls? All the cool kids are doing it.
Well I can’t grow that good of a beard and I don’t want all those other brewers in NE to make fun of me.

What is going to be different about having your own brewery as opposed to an Alternating Proprietorship?
Obviously the Alt/Prop has been extremely successful for us, Badger HIll and Lucid. We would do it again in a heart beat. The main advantages of this arrangement however are tend to be when the brewery starts up. We had quicker entry into the market, access to a bottling line, etc. All huge for a business that requires a lot of capital.

There are disadvantages as well to this sort of arrangement. We wouldn’t be able to open a taproom within that facility and expansion can be difficult. The new brewery will rectify these.

The big thing for us besides all the new beers we will brew, is we will be able to have a place to share a beer with our customers face to face. Beer events you get to meet a ton of people but its so fast that you don’t have much time with anyone. It will be great to be able to have that connection with the beer drinkers, which is otherwise difficult to do with what we are currently doing. It will be nice to not just “toast” people on Untappd but to do it in real life.

Is there any intention, or is there enough capacity to carry on the Alt. Prop. tradition within the Bad Weather Brewery?
Right now there are no plans to brew other beers besides Bad Weather beer in the new facility. We need to focus on our next step before we consider teaming up again.

How large is the new facility?
The facility in it’s entirety is is roughly 12,000 Sqft but that includes an expansion area and a community room/gallery in addition to the taproom and brewery. So we have good room to play around. We like the idea of a cool little sculpture garden out front for a patio. It would be fun to do discounted beers for those drinking out in the patio when the Weather is crap. See how many people will drink Bad Weather in bad weather.

How crazy is the new Bad Weather Brewery going to be? Are we talking full kitchen, 72 taplines, one-off brews, 6 cask engines?
You have that wrong, we are planning 72 casks, nah that might be too much to manage.

We will of course we will have plenty of one-offs, infusions, a couple casks, small batch brews all that fun stuff to go along with our mainstays. I like the idea of playing with familiar beers and tweaking the recipe. For instance most people know OMINOUS our cold weather beer, I think it would be fun do that brew but change around the yeast. Show people the difference between strains, be educational and delicious at the same time.

We are especially excited for beers that would have been difficult to do at our shared facility. Such as barrel aging, sours and lagers. We purchased a 20 barrel brewhouse and 20 and 40 barrel tanks to with it.

What does this change mean for Bad Weather Brewing Company?
It will be a huge change for us. Capacity will increase so our reach will expand. We will be able to add more beers to our regular packaged line-up as well as have a bunch of taproom exclusives. So far Bad Weather has really just been Zac and I, obviously the lucid crew has been a great help but we have had no employees of our own. So we will bring on a whole new team.

Fulton and Surly are both opening, or soon to open, their second brewing facilities. Is that something you could see happening for Bad Weather?
Obviously those two companies are kicking serious ass and making great beer and would be thrilled to be as successful as they have been. We do have room to grow a bit in the current space, but if we keep doing things right we would inevitably run out of space. This new spot will always be the face of the company, if we were to expand beyond this next step (if this one doesn’t kill me) the expansion may be similar to Fulton’s and build a strictly production facility elsewhere.

When does construction start?
If you asked me that question last year I would have said we would be open by now. If you have been following the social media of all these breweries you know that there always are delays. We hope construction to start soon, if it doesn’t I will start pouring the concrete by myself.

When does the taproom open?
Whatever date I tell you I’m sure it won’t be accurate… if construction starts as soon as I hope then we should be open early next year.

Where can people find out more?
The best places will always be social media and the website to a certain extent. If you buy me a pint I will probably share more details then I probably should, so if people really want to know more that’s the avenue I would recommend.