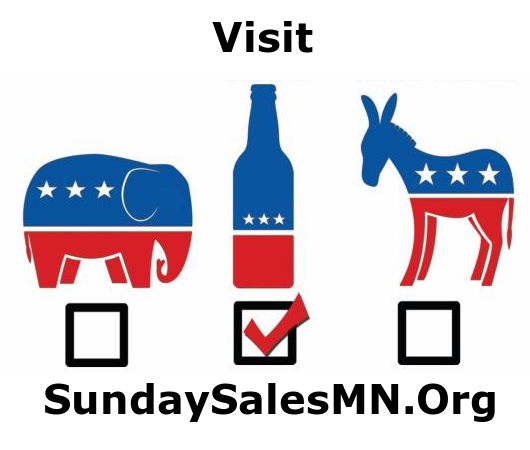 SF58: Being introduced in 15 minutes, in the Senate…Sunday Liquor sales bill

A six-pack of liquor bills have been introduced in the House. Bills include everything from a Sunday sales pilot program, to growlers for qualifying brewers, a local option, and full repeal. The most appealing of the House bills is likely the bipartisan authored HF115, the full Sunday repeal. Special interest groups have fought growlers as much as a full repeal in the past, they are likely to do so again. Opposition might as well fight full repeal, a bill that serves every Minnesotan. A full repeal bill may also act as a the local option. When Sunday liquor sales are legalized at the state level, cities may still choose to restrict the days and hours of sales, as they already do. Expect at least one more version of a repeal bill from Rep. Jenifer Loon (R -Eden Prairie). Representative Loon has been working hard to repeal the prohibition on Sunday liquor sales for some time.

The effort to repeal Sunday is supported by both the Democratic Governor Mark Dayton and Republican House Speaker Kurt Daudt.

“Commerce is well enough established as seven days and nights a week now, ” Dayton said. “For us to say it doesn’t apply to this or doesn’t apply to that really doesn’t make much sense. There are an increasing number of Minnesotans for which Sunday isn’t a religious holiday.”
– Star Tribune, December 28, 2013

Speaker Daudt went so far as to make it his new year’s resolution.

However, not everyone supports bringing Minnesota into the modern era. Senate Majority Leader Tom Bakk (D -Cook) has voiced opposition to the repeal of the blue law. A recent article from Star Tribune cites Bakk as supporting the Sunday liquor sales ban on behalf of government run municipal liquor stores.

Commerce Committees have always been a sticking point. Regardless of overwhelming support Commerce Committee Chairs are not required to give Sunday sales bills a hearing in their committees, and usually do not. Senate Commerce Chair, Sen Jim Metzen (D -South St. Paul), has never given a full repeal bill a hearing. Let’s hope incoming House Commerce Chair, Rep. Joe Hoppe (R -Chaska) hears the bills.