The measure to extend the hours of operation to 10pm Mon-Sat was passed by the City Council with a vote of 5-0. 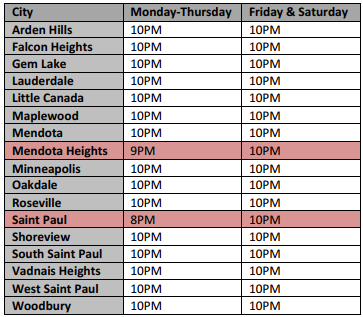 Of course, there were some naysayers. Jim Thomas, of Thomas Liquors, was opposed, as were owners of Park Liquor, and 1st Grand Liquor. But, owners of Selby Wine and Spirits, Christine Liquors, and MGM Liquors were all in support of the change.

The proposal met with opposition from a handful of mom-and-pop retailers, worried about the additional expense of adding night staffing.

But an overwhelming number of letters and emails to city offices, however, supported the change.
Pioneer Press – October 12, 2016

Several Saint Paul brewers supported the extension in business hours. Wabasha Brewing gathered a petition with an impressive number of signatures. After the law goes into effect (30-days from October 12th) Saint Paul brewers will be able to sell growlers of fresh locally made craft beer until 10pm.

Of course, neither brewers or liquor stores will be forced to stay open later, but now they have the option.