How many growlers do you own? Should Minnesota beer consumers be required to purchase a growler (or several) from every local brewery they choose to support? In my basement right now is a wide and varied collection of 64oz jugs from across the state. 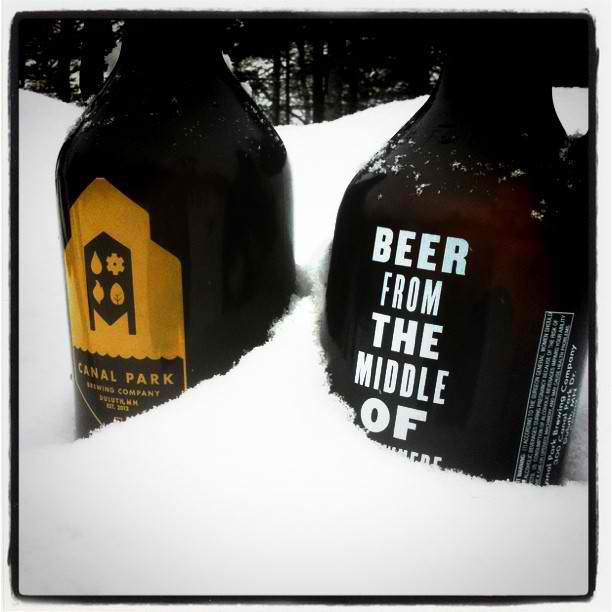 We are constantly being asked by brewers and consumers if there is a solution to their growing growler problems. Nobody wants to have 2 or 3 growlers from every brewery sitting in their basement. Like many other liquor issues Minnesota is behind the times.

“I’ve had a number of people stop by the taproom with growlers from other breweries wanting to get them filled. People traveling from other states that allow filling of any growlers are accustomed to this, said Patrick Sundberg of Jack Pine Brewery”

In Oregon a growler is defined as a refillable, securely-covered container, of two gallons or less. And many establishments, both on-sale and off-sale, can fill them for you. You might ask which brewer has their branding on all these growlers? Good question, but nobody in Oregon cares about the original branding as long as the growler meets TTB requirements. These requirements are commonly met with stickers bearing the requisite information.

What is the mandatory label information?
You must label your beer with this information:

Net contents – show net contents as ½ gallon. You may use “64 ounces” in addition to but not in place of “½ gallon.”

Do not make a statement as to payment of internal revenue taxes.

Government warning label – use the guidelines above (see 27 CFR Part 16).

Can Minnesota do this with our growlers? We most likely already can. There is nothing Minnesota law saying brewers can’t reuse growlers as long as they comply with TTB regulations. However, always wanting to operate within the law, Minnesota brewers are understandably hesitant to just begin reinterpreting the law and start slapping stickers on jugs. And let’s be honest, some brewers may not want to fill growlers from other brewers.

Representative Mark Anderson (R-9A) has drafted legislation that would give Minnesota some much needed clarity in the area of refilling growlers.

(b) A brewer may, but is not required to refill a Container or bottle with malt liquor for off-sale the request of a Customer. A brewer refilling a container or bottle must do so at its licensed premises and the Container of bottle must be filled at the tap at the time of sale. A bottle or container refilled under this paragraph must be sealed and labeled in the manner described in paragraph (a).

No slouch when it comes to beer, Representative Anderson plans to open his own brewery near Gull Lake some time in the not too distant future. However, Anderson says his growler bill is purely constituent based. He had never thought about the growler problem until he was asked to address it.

The growler swapping bill makes a lot of sense for everyone involved. Lower cost to brewers on glass and storage, increased access for consumers, and increased environmental responsibility.

“Growlers are one of the lowest waste package(s) on the market.  Opening up the option for Minnesota breweries to fill ANY growler, as is possible in other states, further increases the sustainability of this package.”
– Patrick Sundberg, Jack Pine Brewery

The same old state requirements are still in play, of course. But if the Anderson’s growler legislation passes, it would be possible to see growlers with a MN Craft Brewers Guild logo on one side and a brewer’s sticker on the other side. A universal growler. Crazy, right? Not if you ask Oregon.