You’re Bringing What to my Party?!

By Kat Magy
Michael over at The Four Firkins suggested that Alaskan Brewing’s Winter Ale, Anchor Brewing’s Old Foghorn and North Coast Brewing’s Old Stock Ale might warm the soul a little bit more as we transition into chillier weather. 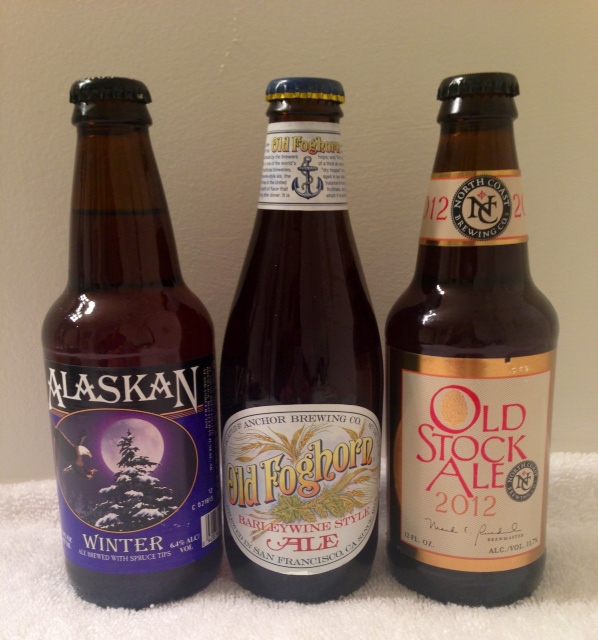 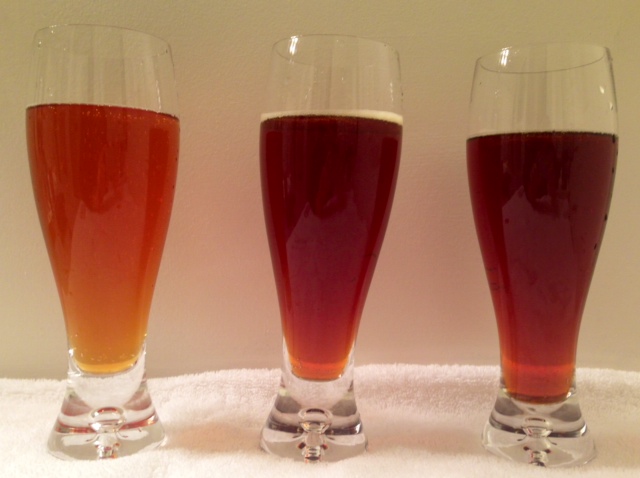 These are the only beers I will be accepting in the form of a Holiday Five-Pack this year.

From the Alaskan tasting notes, “Brewed in the style of an English Olde Ale, this ale balances the sweet heady aroma of spruce tips with the clean crisp finish of noble hops. Its malty richness is complemented by the warming sensation of alcohol.”

Kat: In the light this beer appears to be a burnt orange. The aroma is really, really light. The first sip is light as well but then it explodes across your tongue. The flavor blossoms into something that is bread-y with a floral taste. I want to say it has a really warm, subtle fruit flavor beneath the roasted malt flavor. The aftertaste is something you could probably sink your teeth into. It leaves a tingling sensation in its wake.

Marcus: This has a nice, red color. That surprises me for a Winter Ale. It yields a very nice, traditional head. It smells boozy, but otherwise there’s not much else there. It has a very malty taste – you can start to feel the alcohol towards the end. It has a really pleasant aftertaste with just a hint of hops.

This Barleywine Style Ale is described by the brewery as, “Brewed based on traditional English barleywine methods. It is highly hopped, fermented with a true top-fermenting ale yeast, carbonated by a natural process called “bunging” to produce champagne-like bubbles, and dry-hopped with additional Cascade hops while it ages in our cellars. Made only from “first wort,” the rich first runnings of an all-malt mash, three mashes are required to produce just one barleywine brew.”

Kat: This beer is a very clear chestnut color. It has a cloyingly sweet nose with a sharp alcohol aroma that tends towards molasses. Carbonation explodes across the tongue with soft bubbles.  It tastes almost like a molasses cookie without the crunch and leaves a very, very dry finish.

Marcus: This beer is a dark red, rusty color. My first impression is that it’s hoppy and malty in a balanced way. A really good blend of the two – it opens up malty and ends bitter and hoppy. This is one of the few beers where the smell is consistent with the taste. And, frankly? It’s really good.

As they tell it, “Like a fine port, Old Stock Ale is intended to be laid down. With an original gravity of over 1.100 and a generous hopping rate, Old Stock Ale is well-designed to round out and mellow with age. It’s brewed with classic Maris Otter malt and Fuggles and East Kent Goldings hops, all imported from England.”

Kat: The color of this beer is a clear, deep reddish-brown. It has a very light smell that is mostly alcohol, bordering on harsh. I do get a slight hint of black licorice or anise, but that’s about as far as it goes. Upon first sip it’s sweet and then assaults you with yet more of that harsh, to be blunt, booze flavor. It sort of distracts from any other flavors that could accompany it. Only after I roll it across the tongue do I feel a drier, chewier beer.

Marcus: I’m going to call this “brown.” It has a very deep malty smell that isn’t terribly heavy or particularly indicative of anything. The taste is lighter than expected but it lingers for a while. It’s very malty, sweet and smooth. There isn’t a great deal of hop presence here, but that’s what differentiates the English Barleywine from the American Barleywine.

Strong Ales and Barleywines are probably Marcus’ favorite variety of beer (though Oktoberfest is most assuredly his favorite time of year). So, what will we load up in those Holiday Five-Packs?