Under the Tree and Into The Cellar

By Dan Belfry and Jon Buck 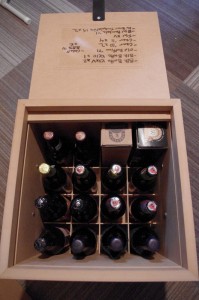 Not so long ago our hobby of beer aging transformed into our passion and that’s when we both slowly began to amass beers in our respective basements. We kept them in what everyone starts with, discarded cardboard boxes from the liquor store. These boxes became unsightly and it was difficult to find the specific beers that we were looking for. Furthermore, they were equipped with flimsy handles, untrustworthy bottom panels and stacked upon one another precariously. We quickly realized that there had to be a better way to store our growing collections of beer.

As we researched options, we found several things that didn’t quite do the trick: expensive and cumbersome refrigeration units, wine racks, shelving units and other homemade solutions. There wasn’t anything out there that was specifically designed with the beer collector in mind. After finding nothing to suit our needs in the market, Jon and I began designing and prototyping what would eventually become the Brewbicle.

At the time we had no intention of bringing these to market; we were making these for our personal beer collections and our mission was simple: to safely and properly store our beer until we were ready to drink it. When we made the first round of prototypes, some friends became interested and wanted a couple for their personal cellars. We made them and began an informal market study and gathered feedback. After about a year of modification, we saw it was time to get Brewbicles out to all the beer geeks who would find themselves in similar situations.

As they are modular units, Brewbicles will easily stack and grow with your cellar. They are sturdy and will hold your beer safely and securely for as long as you want to age it. Brewbicles hold bottles upright and in a light-free environment, which is important to proper aging. Perhaps most conveniently, they have an inventory system that allows you to identify exactly which beer is stored where, when it comes time to open what you’ve been so carefully maturing. Brewbicles are designed to be space conscious, with less of a footprint than a case of beer and the ability stack safely. They are meant to be stored in a cool place, such as a basement or an interior closet to keep your beer at a consistent and cool temperature.

Brewbicles make a great holiday gift for that special beer geek in your life who will think of you every time he or she places their treasured beer into its’ tailored home. Plus it is made by beer geeks; we are truly passionate about our product and have designed the Brewbicle around beer, and its’ aging.
Brewbicle Benefit List:
– Modular and stackable
– Light-free and upright storage
– Heavy-duty construction
– Integral Inventory system
– Holds 25 – 12oz bottles or 16 – 22oz/750mL bottles
– Customizable
– A one-of-a-kind gift that will be remembered

Brewbicles are made in locally Minneapolis and have been sold all over the country. Visit www.brewbicle.com or write info@brewbicle.com for more information. Dan and Jon are happy to answer any questions.