The development will allow Surly Brewing to expand beer production to 100,000 barrels of Minnesota craft beer every year. The brewery will also have a 300-person beer hall and beer garden, and feature a full-service restaurant and events center.

To kick things off, Omar Ansari, founder and president of Surly Brewing and his team invited local politicians, including Minneapolis Mayor R.T. Rybak, and project stakeholders to speak about what the project means to the community.

“Today is an opportunity to thank our fans, the Twin Cities, the state, and all of our partners for their support,” said Ansari. “We’ve worked hard for the last two-and-a-half years to ensure that this brewery truly is a destination for all craft beer fans, and it’s placed perfectly in the center of the Metro right between Minneapolis and St. Paul. We’re looking forward to creating something really special that everyone will be able to enjoy by the end of next year.” 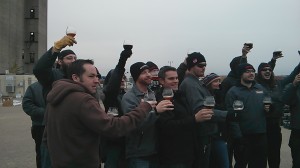 Hooligans, all of ’em

“I’ve said it before and I’m happy to say it again, Minnesota Nice is about to get Surly. The City of Minneapolis and Surly Brewing have been great partners over the years,” said Minneapolis Mayor R.T. Rybak. “We rallied the voices of activists across the state together to pass the bill that allowed this project to move forward, then worked together to transform this formerly blighted site into a Destination Brewery and the next Minneapolis beer hot spot. Our partnership is a great example of small business and government working together to create good jobs in manufacturing, hospitality and tourism — and, let’s not forget, a really delicious local product.”

Once the speaking, thanking, and hand shaking was done and out of the way, local dignitaries joined Omar for the first of many pints in the new location.

Look for the the 8.3 acres of land at 520 Malcolm Avenue SE in Minneapolis to be finished around late 2014. It is close to major roads, bicycle routes and two stations on the Central Corridor light rail line. As a St. Paul resident, I’m glad to have their facility a little more centrally located, and near public transit. I’ll be crossing my fingers, hoping for Darkness Day at the new brewery.