After a brief summer hiatus (man it is flying by isn’t it?) we’re back and glad to be opening some more delicious brews and share our findings with you guys. We’ve gone with an Old Ale from North Coast Brewing out of Fort Bragg, California. This beer has an excellent reputation for its ability to cellar well. In all fairness we’re likely opening them before their prime, according to reports we’ve heard, but curiosity got the better of us and we wanted to see where this beer is heading. 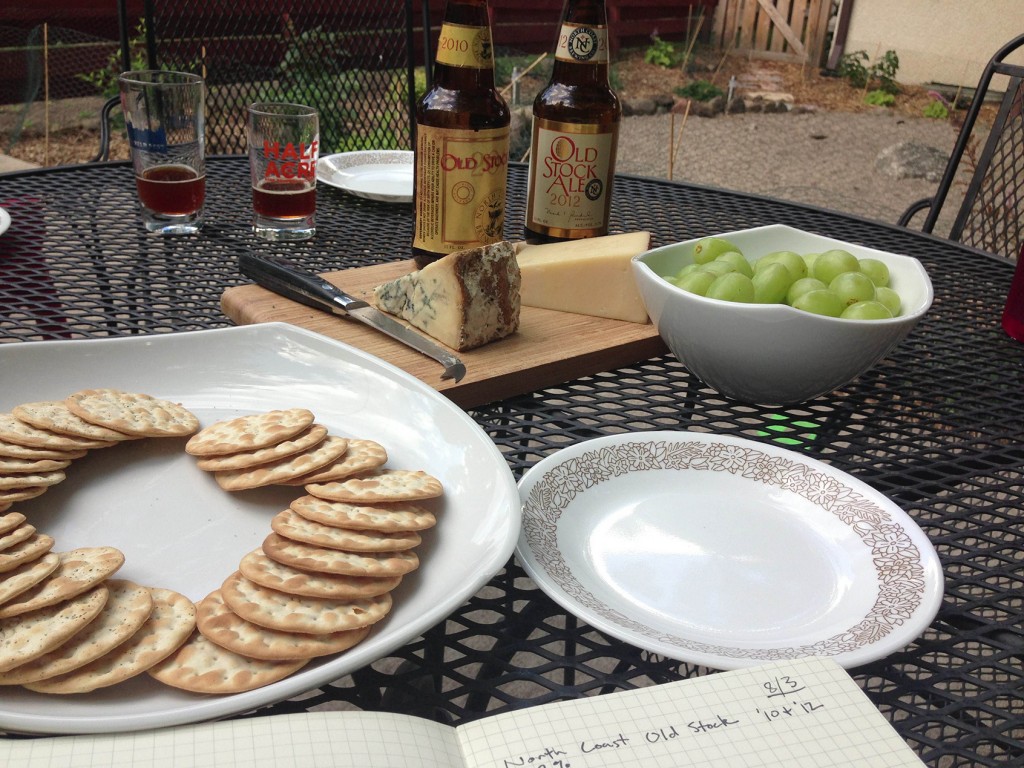 This Old Ale is coming in at a rather large 11.7% ABV for both vintages the label has changed slightly over the years but we believe that the recipe is the same year-to-year. Along with our tasting we’ve decided to bring some food into the equation as well. We have selected a stilton and a cheddar with salt crystals, included also for a palette cleanser were some grapes. All of these were a winner in our opinion and really complemented the beer’s sweetness.

Appearance (’12): There is a small amount of with head which quickly dissipated and clung to the sides of the glass. The color is dark-red chestnut, and decidedly clear. Which was interesting as the older one had a haze present to it. Aside from the haze however the coloring is identical.

Appearance (’10): By contrast to the ’12 there was a haze present in the ’10 but still had the same dark-red chestnut coloring. Lightly carbonated even after a rather aggressive pour there was little head developed and what was there dissipated quickly. There is some lacing when the beer is swirled.

Aroma (’12):  Possesses a very malty nose, and there is a forward aroma of sweet cereal grains with a fleeting fruit. The fruit and gain played second fiddle to the alcohol here however. No doubt it is the front runner here, it carries throughout the different aromas and stings slightly.

Aroma (’10):  The nose is sweet and deep with fruit and caramelized sugars. A wonderfully simple yet powerful combination of plumb and other musty aromas combined with the caramel create a very pleasant nose. Underlying this is a distinct but not overpowering booziness. Really can’t say enough about how good this is smelling just wonderful.

Taste/Mouthfeel (’12): Kicking things off here is a hoppy bitterness which doesn’t last very long but most certainly is there. It abruptly is overpowered by a strong, sappy, dry, sweetness which reminds us of molasses. The sweetness is distinct, but dissipates more quickly than anticipated. The small amount of carbonation lends itself in the hoppy—> sweet transition. There is a surprising lack of flavors that linger, this one finishes nice and clean. This was a rather surprising characteristic to us as we’ve become so used to anticipating that these big beers will stick to your buds but this was a pleasant surprise.

Taste/Mouthfeel (’10): There is no hop bitterness to be found here, the taste skips right into the sweetness, however there has been a fruity development and the dryness has gone away. The fruitiness has married with the alcohol to make a wonderful “booze-soaked fruit cake” kind of flavor. Don’t mean to drudge up negative connotations with the fruit cake description, not at all what we intend. In fact it is very pleasant, more fruit cakes should taste like this. There are layers of dark fruits, cake/breadiness, sweetness and the comforting warmth of alcohol. The mouthfeel is velvety while it is present, this one doesn’t linger either it finishes cleanly and dry.

Overall Comparison (’12 and ‘10): Old Stock has a reputation as a beer that is good to age, and we can start to see why. What starts as a fairly straight forward malt bill and some booze really evolves into a beer with some dimensional layering and great interplay of flavors. The ’12 was kind of flat and lacked much interest in terms of complexity and harmonizing elements. It was on sitting on this guy for a bit that we began to see the benefits of oxidation, different malt flavors coming through and outshining the hops and the booze-burn. What resulted was the alcohol enhancing and rounding out of the beer rather than finishing as an exclamation point on a sweet beer.  This being said we both thought that the ’10 also lacked a little depth, don’t get us wrong it was a good beer and we will continue to stock our cellars with Old Stock Ale, but don’t go into this expecting a bouquet of tastes. Perhaps this will change with time or perhaps our expectations are clashing with the reality that a simple, well-made beer doesn’t need to have a dozen things going to make it interesting. Sometimes it is good to have a beer like this to remind us to enjoy the simple side of life as well.