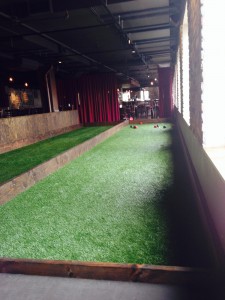 Republic Uptown has announced the opening of bocce courts inside their 2nd floor Calhoun Square location.

“Bocce is an ancient game, with origins dating back to at least 264 B.C. when Roman soldiers played between battles, but we prefer our version – in the comfort of Minnesota’s finest craft beer bar,” said Republic co-owner Matty O’Reilly. “Playing bocce requires skill, fitness, strategy and cunning, all characteristics we frequently see in Republic’s customers, so this is a natural match.”

Bocce courts Republic Uptown are open to customers daily. The courts are also available for reservations by organizations, companies and anyone else that can be pulled off their barstool. Those interested in more information or to reserve a bocce court may call 612-886-2309