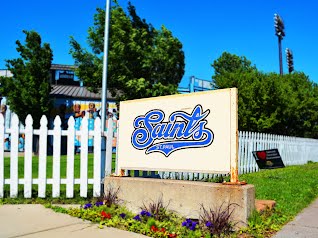 Brewers and representatives were on hand to discuss details of their offerings, and star of movies “Super Troopers” and “Beerfest” (and Minneapolis native) Erik Stolhanske made an appearance to greet people and throw out the first pitch. Minnesota’s brand new beer-centric publication The Growler had a booth with a healthy amount of copies of their debut issue for the taking.

Some of the more interesting highlights included hearing loose plans from Tod Fyten of St. Croix Brewing and Mantorville Brewing about setting up a brewery and the Smoked Rye Whiskey Ale on deck for next weekend’s St. Paul Beer Festival. Another bit of intriguing information came from Lift Bridge, who will be bottling Hop Dish later this summer. They also mentioned that their taproom hours have expanded, Tu-Th 5-8p and Fr & Sa 12-5p.

Lucid had an ironic leak in the Air tap line, which ended up getting taken care of after someone ran back to the brewery for a replacement barrel and parts. After a very brief hiatus, the golden blonde ale joined Cammo (a dangerously smooth 9% double IPA) and Dyno (a light bodied pale ale perfect for patio consumption) as options.

Speaking of patio beers, the Zommerfest from Schell’s was an incredibly crisp, light, and refreshing Kölsch. It struck me as the type of gateway beer that I’d offer up to someone partial to macros, and it was one that I’ll be coming back to over the next few months.

I was curious to try Vine Park and Granite City, as I’m familiar with both places, but had yet to try anything from either. Mankato was a welcome participant, whose beer was made available only around the beginning of the year, and until recently, was previously distributed primarily in the Mankato area. They had Stickum (an Alt) and Original (a Kölsh) available for tasting.

The marriage of local breweries and baseball proved to be a good one, and it has a lot of potential to grow into a really fun yearly event to return to. Since baseball is “America’s Pastime,” and it’s arguably difficult to enjoy it without a delicious hopped beverage, it only makes sense that they come together for a lively day of sun, suds, and Saints.

Beer is way too good to be kept a secret, so I love to share my experiences with as many heads as possible in hopes someone out there will get turned on to something new. At the very least, I'm on a mission to verbally smack the micro out of the hands of those that like to drink beer.