Fall is really the start of what we like to refer to as beer season and that undeniable chill in the air brings about an instinctual desire for bigger beers. This is also the time of year for football, chili and some very notable beer releases. One that should be hitting our area soon is Bell’s Third Coast Old Ale. According to the Bell’s website, this is how the beer is described: Third Coast Old Ale focuses on malt, offering notes of burnt caramel & other earthy malt flavors. Designed with vintage aging in mind, the malt aspect is matched to a heavy complement of hops. Sharply bitter at first, this will fold into the malt character over time and balance out the maltiness. 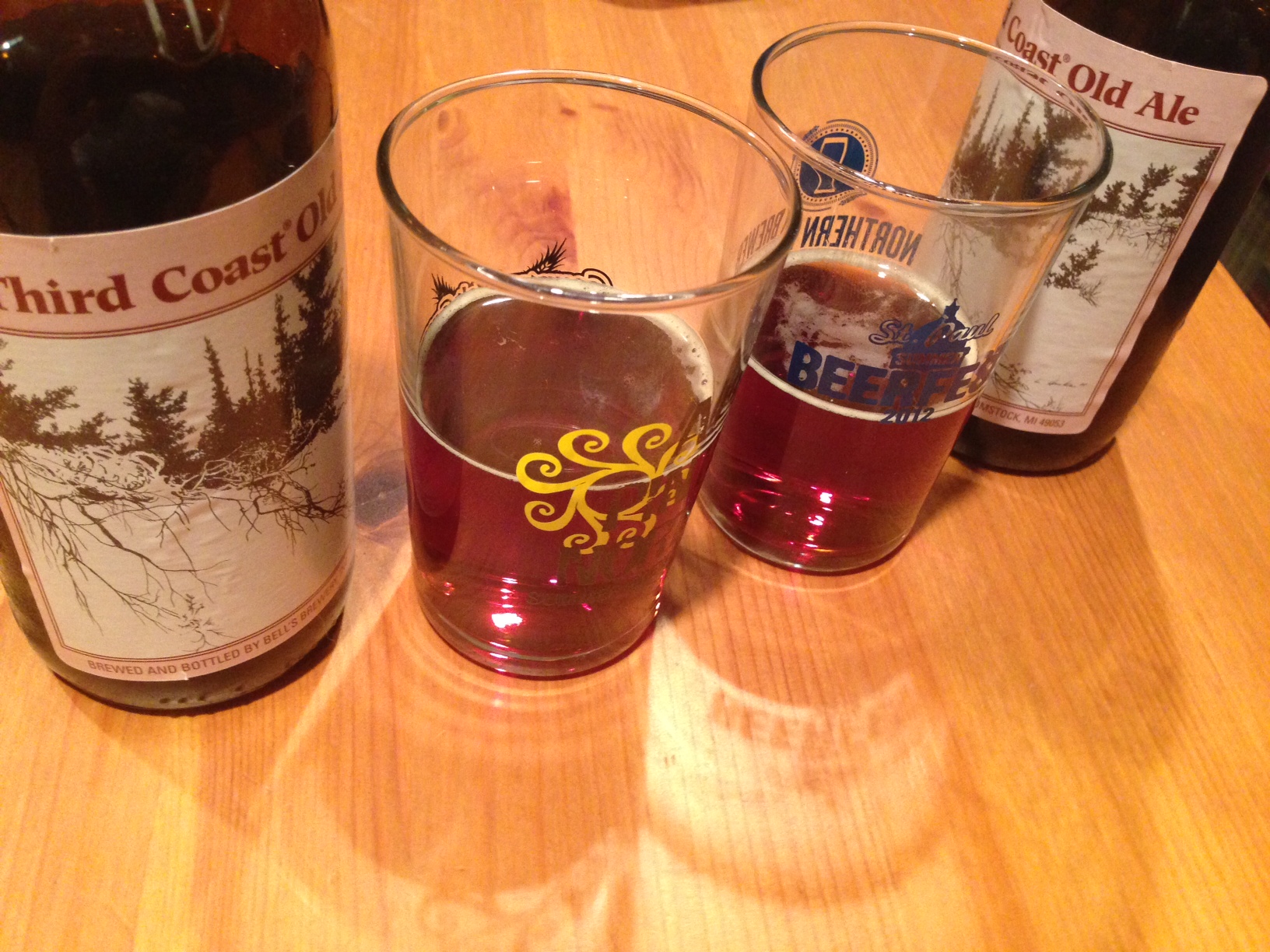 Appearance (’12): There is a small amount of beige colored head, which only includes tiny bubbles that float and gather at the edges of the glass. When held up to the light, the color is a deep brown with red undertones, revealing a deep amber sap color. It is as clear as can be on the initial pour and there is no detectable sediment or yeast/sea monkeys.

Appearance (’10): There is very little carbonation visible on this one and the tiny bubbles of the ’12 are far less present here. The small amount that does surface has very little space to congregate anywhere other than at the edges of the glass. The color and clarity are identical to the ’12 and so is the absence of sea monkeys.

Aroma (’12):  With a little agitation the beer reveals some layered aromas, buttery biscuit, honey, a full complement of grains, booze and faint cranberry or cherry in the back ground. The biscuit comes up first and is deep and rich (hence the buttery, though not actually smelling like butter) and warming. Honey is predominant within the sweet aromas, dry and unrefined/raw. The honey notes work well with the floral grainy aroma that follows. Booze and fruit finish things off with a sharp and tart aroma.

Aroma (’10):  With very little carb to agitate and help my olfactory sense, one has to get right up in there to get a good sense of what’s happening. Most evident is a more predominate fruit profile and the biscuit has turned into bread and softer smell of grains. The honey has taken a turn as well, taking on some deeper, sweeter caramelized notes. Still present, but with a diminished role, is the tinge of alcohol.

Taste/Mouthfeel (’12): A surprising amount of hop are here, leaving an immediate bitterness and finishing with a resinous dryness. The biscuit is there for sure, like a club cracker, rich and billowy. The honey sweetness is there too and it’s dry as well, leaving the tongue somewhat raw. The mouthfeel is thin, but booze and bitter fruit linger on the tongue and nose. This is a fairly well rounded beer at this point; however, the bitterness is really making its mark. At this point, we’re not able to determine if the bitter dryness is from hops, sugars or the fruitiness which caps everything off. Either way, it’s a good beer, but clearly has some time to go before it hits a really well rounded profile and has a wow factor.

Taste/Mouthfeel (’10): Ooooh the sweet flavor has really come into its’ own and takes a front seat, by comparison to the ‘12 anyway. The grains really take on a more caramel soaked breadiness and there are no detectable hoppy notes to run interference on the sweetness. Caramel kicks things off and permeates as the malt and grains become present, while the caramel lingers and carries through to the end. It is rich and round and full, and the fruit at the end has really mellowed, finishing in a pleasantly un-bitter way. The taste is thicker, but the beer itself isn’t. Plus, it hangs around in a sticky awesome way for us to enjoy.

Overall Comparison (’12 and ‘10): The ’12, at almost a year old, is still bitter and rough around the edges, but shows signs of potential. We are always to making some educated guesses when trying new beers, or deciding when to open something from the Brewbicle, and these versions showed some signs. This one has a lot of the great hallmarks: sweet, boozy and layered with flavor. While the ’12 probably wasn’t the best beer, it is likely because it hasn’t had enough cellar time, and we can say this with a bit more confidence having had tried the ’10. The ’10, in our opinion, is on the way to great things. The amount of change between the ’12 and ’10 will likely mean that we will hold on to the ‘10s for another 2 years and see what they are taste like, and then decide if we need to drink them all or if we should wait even longer. We are looking forward to the direction this will go and are happy we’ve got some more in our cellars.