Bad Weather Brewing Company is announcing the Grand Opening of their St. Paul taproom and production facility at 414 7th St. W., St. Paul, MN. A welcome addition to Little Bohemia neighborhood, the 1200 sqft. brewing operation is just a few blocks away from the Xcel Energy Center.

The newest addition to the growing St. Paul beer scene is scheduled to open October 9th, at 3pm.

Posted by MNBeerActivists on Thursday, June 25, 2015

Making the transition from Lucid Brewing to the new facility is Andy Ruhland. After years of earning his stripes in the brewing industry, Andy will take on the title of Head Brewer at Bad Weather Brewing. Andy is an award winning brewer and has a degree in Intensive Brewing Science and Engineering from the American Brewers Guild.

“A lot of talk is going on right now on the booming brewery growth in Minneapolis,” says Ruhland. “I think St. Paul is an untouched gem. A relaxed, easy going city that is yearning for more breweries/taprooms. The overall reception here has been fantastic. So many people stopping by, I can’t wait for us to open our doors. Not to mention the fantastic water quality!”

The new St. Paul facility will allow Bad Weather to expand production capabilities to meet increasing demand. The taproom will provide an exciting place for craft beer lovers to enjoy a rotating list of unique offerings, in addition to Bad Weather flagship WINDVANE and seasonal favorites OMINOUS, FIREFLY RYE and MIGRATION. Four new beers will be available on opening day to compliment the current lineup.

“Our new space gives us the opportunity to really introduce drinkers to our brewery in a way that has not been possible to this point.” says Carpenter. “Increased flexibility in brewing out of our own space, and serving directly to the taproom will allow us to play with many more varieties of beer while keeping complete control of the process. We look forward to sharing our creativity with the community” 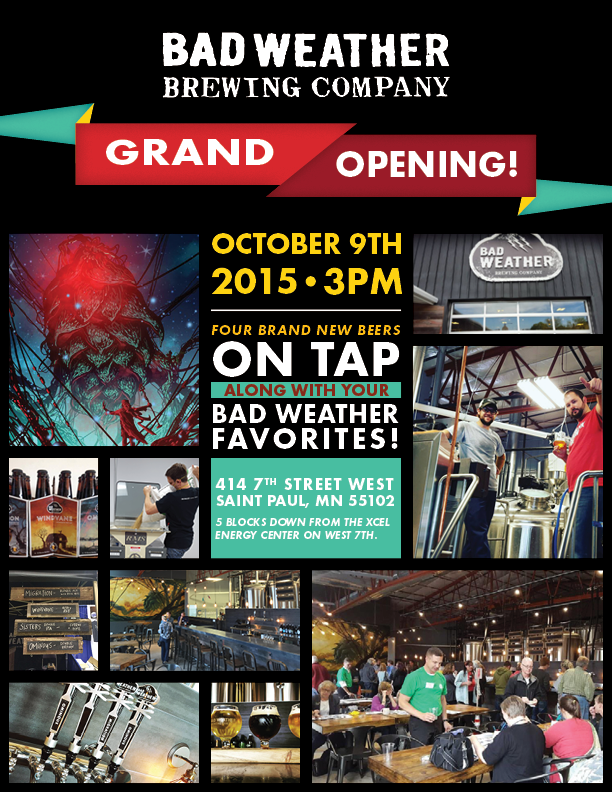