The Winterblot Festival will include a 6 tap HammerHeart Brewing take over featuring a special brew made in limited quantity just for this event AS WELL as limited merch for the FEST featuring the poster art by NATE BURNS.

Tickets available online here or pick up tix at the HammerHeart tap room, the Triple Rock, or Into the Void records in St. Paul. 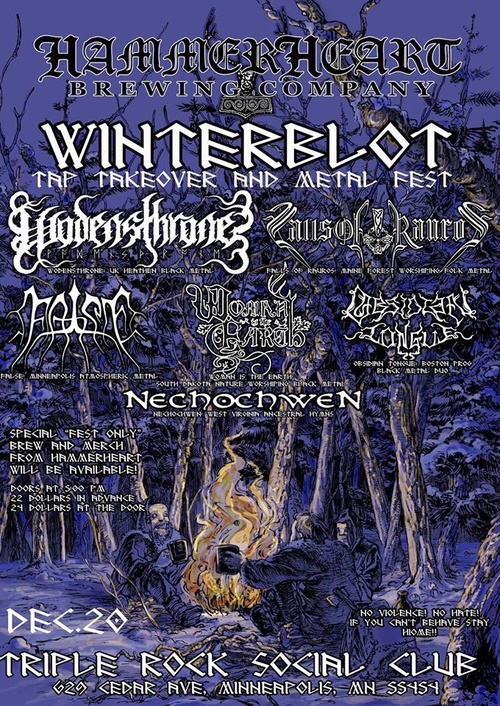 Wodensthrone
Wodensthrone were formed in Sunderland in 2005 with the goal of creating stirring heathen black metal in the grand tradition of greats such as Enslaved, Moonsorrow and Primordial; a revitalising force capable of beautifully formed progressive flourishes, devastating power and unforgettable gilded melody, a sound perfectly formed to address meaningful, thought-provoking themes with passion and dexterity. While a number of lineup changes have shaped the band’s maturation over the years, their commitment and dedication to this mission has never faltered.
​
Following a succession of well received split releases, Wodensthrone truly came of age with their hotly-anticipated debut album Loss, released by Bindrune Recordings in 2009 to great critical acclaim. A masterstroke of epic heathen black metal, drenched in emotion and mystical potency, Loss opened a window upon the Anglo-Saxon soul by striving to authentically give voice to an ancient worldview in today’s fractured landscape. The result was an album that won the band favor from all corners of the globe and caught the eye of Candlelight Records, who signed the band for a three album deal in 2011.
​
Now, as spring takes hold of a troubled world in 2012, Wodensthrone return with Curse, an album that transcends the impermanence of individual nations and cultures to address timeless, universal questions of spirituality and freedom. Curse explores mankind’s most inherent and profound spiritual flaw; the instinct to lay the responsibility of our fates at the feet of imagined Gods, to submit without question to the cultural machinery – religious, political, social, economical – that imposes systems of power and control to exploit, enthrall, corrupt and oppress. The result is a tumultuous, dynamic album rich in tension, conflict and a grandeur verging on the terrifying.
​
The diverse musicians that make up Wodensthrone have unified their experiences and skills to render the grand narratives of Curse into a richly evocative heathen epic that dwarfs even its predecessor, a heroic encapsulation in song of mankind’s will to rise above its shackles, to pursue true freedom, shun the poisoned comforts of subjugation and stand proudly with values they have won for themselves with the blood and sweat of endeavor, unfettered from Gods and masters.
​
Wodensthrone created Curse in Priory Studios in 2011 under the watchful eye of Esoteric’s Greg Chandler, who helped take the band’s performances and sound to a whole new level of majesty and mastery with his meticulous craftsmanship and attention to detail. The result is an essential album for fans of Emperor, Enslaved, Primordial and Moonsorrow; an album that proves Wodensthrone’s mettle beyond all reasonable doubt as one of the UK’s strongest black metal exponents.

Obsidian Tongue
Founded in January 2009 as a solo project by Brendan James Hayter.
An album was recorded on a Tascam 4-track in the summer of 2009, only to be discarded and used as demo material to find other members. Greg Murphy joined the band in November 2009.

Satisfied with their sound as a duo, they recorded a demo of all new songs in February 2010, once again on the same 4-track cassette recorder that begun the project. 100 copies were dubbed and hand-numbered and sold at shows when Obsidian Tongue begun playing live in the Spring of 2010.

After another demo, the Subradiant Architecture demo in 2011, their debut album “Volume I: Subradiant Architecture” was recorded and mixed onto vintage tape machines in March 2012 at Mystic Valley Studio in Medford by Alex Garcia-Rivera. The album was tracked on 2″ tape and mixed down onto 1″ tape. The sound is organic and raw, allowing the compositions and natural tones of the instruments to speak for themselves.
They self-released the album on CD under their own newly founded imprint Dissociation Records on May 25, 2012, backed by a distribution deal with Ragnarok Records.

The release was followed with another string of live performances within their native region of New England, including a direct support slot opening for black metal titans Agalloch and Fen in October 2012. This was followed by their first tour in November 2012, trekking across the east coast for 2 weeks. The journey proved to be a success and the band intends to tour much more in the future.

With nearly 5 hours of music composed and ready for release, the duo will continue exploring and celebrating the psychedelic, cathartic and unifying principles of extreme metal until the end of their days.

Woman is the Earth
Woman is the Earth consists of three members, Jon Martin (drums, vocal chants), Andy Martin (guitars, bass effects) and Jarrod Hattervig (guitars, vocals). The project, based out of the Black Hills of South Dakota, was started in 2007.

Nechochwen
Formed in 2005, West Virginia’s Nechochwen is the passionate exploration of Native American Indian heritage through stunning classical guitar instrumentation and lush atmosphere. From the ashes of the band Angelrust, Nechochwen, the sole creator of this art and man from which the “band” receives it’s namesake, set out to create a very powerful trip back in time with his music and further explore the tales and lives of his ancestors. Nechochwen is passion, creativiy and a powerful spiritual awakening that the listener can feel pouring out of the compositions of this art.